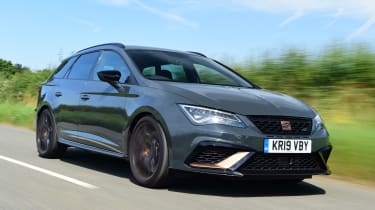 More power isn’t always a guarantee of more fun but in the case of the SEAT Leon Cupra R ST, the ABT tuning package is an absolute no brainer. It moves what is already a thrilling and fast family car into even pacier territory with little trade off. Best of all, it’s only a £500 outlay for the extra oomph, so the, admittedly not-so-cheap, asking price of the base car doesn’t spiral out of control.

When we drove the new SEAT Leon Cupra R ST back in March, we singled out one option in particular that buyers of this limited run hot estate should probably think about speccing.

At just £500, what the optional ABT Engine Control Unit gives you on paper makes it look like a total bargain. Power surges upwards from 296bhp to 345bhp, with torque leaping up an extra 40Nm too, and it does this while barely surrendering any fuel economy - SEAT still claims 31.2mpg. Best of all, the upgrade is manufacturer approved, so it doesn’t void SEAT’s standard three-year warranty.

The end result, stacked on top of the latest tweaks bestowed on this ‘R’ badged Leon Cupra ST, makes the ABT tune-up seem like an essential box for buyers to tick.

The Leon Cupra R ST arrives with a handful of new trick chassis components such as new front suspension uprights with additional camber and adaptive dampers. The front brakes are provided by specialists Brembo, too. 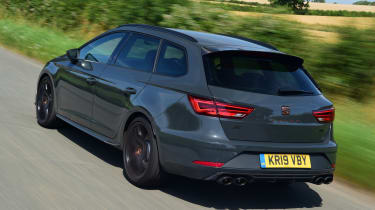 The turbocharged 2.0-litre petrol four-cylinder engine under the bonnet remains almost completely unchanged from its application in the Volkswagen Golf R. But, the ABT package goes some way to taking the already barnstorming experience to another level, dragging the Cupra R a long way from being just a badge engineered VW Group product.

Alongside some minor alterations to the Cupra R ST’s exhaust system, the ABT tuning package is a simple tweak to the car’s engine management computer. The hack is almost undetectable if you’re driving sensibly - throttle response largely mirrors that of anything else powered by the VW Group’s turbocharged EA888 2.0-litre, and perhaps that’s why official fuel economy doesn’t fall off a cliff, despite the enormous increase in power.

Ramp up the pace and key-in Sport or Cupra on the drive select mode controller and suddenly ABT’s efforts explode into life. A whole new level of strength on full boost reveals itself. More power can’t improve what is a slightly too languid DSG gearbox in a car with so much performance, and the paddles are disappointingly cheap feeling. But, it’s so easy to ignore the shortcomings of the transmission and just enjoy the raw pace now on offer when you venture above 3,000rpm on full throttle. The performance isn’t quite in super hatch territory, but is a definite step towards it.

The power works with the chassis setup, the all-wheel drive system and the relatively compact proportions of the Leon ST to deliver a car that’s a serious point-to-point performer. Largely, that’s because this remains a devastatingly easy car to carry pace in. There’s just so much grip to utilise, the steering, while one-dimensional, is sharp and direct on turn in, and the Brembo front brakes provide great stopping power too.

The suspension is well judged, as only huge potholes, speed humps, expansion joints and other predictables really upset things. At pace, the frequency of the damping is spot on. There’s no choppiness or unwarranted movement, so it’s a decently comfortable, if noisy, car for the motorway too.

Throw in some nice Alcantara trim elements and a highly useful 587-litre boot, and the end result is a powerful, practical family car.