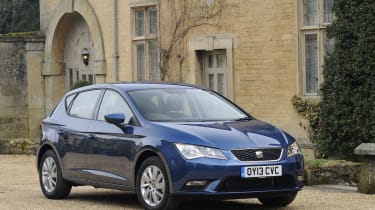 On paper, the SEAT Leon SC is just a three-door version of the five-door Leon hatch, but on closer inspection it's a model in its own right. Thanks to a 35mm shorter wheelbase, the Sports Coupe (SC) not only looks more dynamic on the road but has slightly more agile handling, too. The roofline is lower and the rear aches are more prominent, which means it has more in common with the VW Scirocco coupe than the three-door VW Golf. Based on the VW Group's MQB platform, it benefits from a familiar range of turbocharged four-cylinder petrol and diesel engines that sip fuel and deliver impressive performance. The handling is tidy rather than particularly dynamic, but gives the Leon SC a huge array of all-round abilities. There are three different trims to choose from depending which engine you go for, but all come very well-equipped, although the entry-level 'S' models do use less high quality plastics and the absence of leather trim in the cabin does make it feel a little low-rent. However 'SE' and the sportier 'FR' models are cheaper than most rivals and feel much more expensive inside.

Now that so many Audis, Skodas VWs and SEATs share the same MQB platform, the way a Leon drives is more closely related to the VW Golf and Audi A3 than ever, which is good news. The steering is light, but has an immediate effect on the front wheels, giving you confidence to tuck the SC neatly into quicker corners. Although SEAT resisted the temptation to make the SC's suspension any firmer than the five-door, its shorter wheelbase and the fact it weighs 20kg less, make it more engaging on a twisting back road – however, despite this the SC’s more grown up attitude means it’s not quite as much fun as it could be. As with the five door SEAT Leon, if you go for the FR trim you do get a stiffer suspension and a lower ride height which helps make the car feel more sporty with very little loss in comfort. In fact the SC is a very relaxing car to travel in. The 1.6 TDI and 2.0 TDI models are quiet, punchy and remarkably efficient, but it's the 1.2 TSI and 1.4 TSI that suit the SC best, thanks to their free-revving character and super-smooth power delivery. Whether cruising through town or eating up miles on the motorway, the SC's refinement is perhaps its stand-out plus-point - barely any noise from the wing mirrors makes it into the cabin, even at 70mph. The 1.8 TSI petrol is the sportiest model available until the Cupra version arrives and will reach 0-62mph in just 7.2 seconds with the optional DSG automatic gearbox.

The the Leon SC set you back around £300 less than the equivalent five-door model. For many people though this saving just isn’t worth the reduction in practicality of not having some rear doors. But those who aren’t bothered about this will find the SC to be very cheap to run. In its most efficient form, the 104bhp 1.6 TDI model returns 74.3mpg with emissions of 99g/km - although that drops to 72.4mpg and 102g/km if you go for the DSG gearbox. The cleanest petrol model is a DSG-equipped 104bhp 1.2 TSI, which returns 58.9mpg and 112g/km, while the 138bhp 1.4 TSI model returns 54.3mpg and 119g/km. Across the range, the new Leon is 22 per cent more fuel efficient than the old model, thanks to a reduction in weight of up to 110kg and an improvement in aerodynamic efficiency. Residuals are stronger than the VW Golf and it will hold onto over 50 per cent of its value over three years while servicing costs should be relatively low as well. It is also priced to undercut its rivals from sister brands Audi and VW.

SEAT has always hailed itself as the most stylish brand in the VW stable, and it hopes the Leon SC takes this to a whole new level. The five-door Leon is a good-looking car but the SC tries to create even more desirability with its pin-sharp creases, lower roof, shorter wheelbase and flared rear wheel arches. But while it certainly looks smart, the design isn’t as head-turning as the Vauxhall Astra GTC and nor is is as distinctive as the Volkswagen Scirocco. On the inside, the design isn't particularly inspiring, but the build quality is much higher than the previous-generation Leon. Sports seats come fitted as standard, while mid and top-spec SE and FR models come with 16-inch and 17-inch alloys. A five-inch colour touchscreen display is standard across the range, as is Bluetooth. The driving position is excellent and despite the sportier exterior design all-round visibility is excellent.

Sacrifice two doors and you'd expect the Leon's practicality to go out the window, but actually the SC is still a spacious car with plenty of room for two adults (or three kids) in the back. Despite the sloped rear windscreen and shorter wheelbase, engineers have managed to preserve the 380-litre boot - which puts the SC close to the top of the class. And although rear leg room is reduced compared with the five-door, there's still more than enough space for a six-footer to sit behind another six-footer. There are 12 cubby holes and five closed storage areas dotted around the interior, too. Opt for an 'FR' version and you get all-round parking sensors as standard too, so it's easier to avoid getting a nasty bumper scrape when parking in tight spots in town.

By basing the new Leon and Leon SC on the same MQB platform as the VW Golf, Audi A3 and Skoda Octavia - as well as all future VW Groups models from Polos to Passats - the Leon is cheaper to build and more reliable than ever, thanks to enormous economies of scale. SEAT finished a disappointing 24th out of 30 in the 2012 Driver Power reliability survey, while the second-generation Leon finished 65th in the Top 100, but we're expecting this new car to fare much better. It has a full five-star Euro NCAP crash rating, too and all the engines in the range have been tried and tested across the entire range of VW group products.