Art of glass: inspiration for the Skoda Kamiq’s LED lights

After Skodas and beer, the Czech Republic is famous for its crystal glass. We take a crash course in creating these fascinating artworks 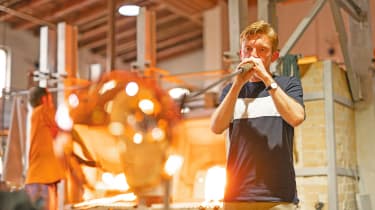 A baby is being made before my very eyes. I’m hot and sweaty, I’m losing layers of clothing and I’ve just been handed a small beer. I’m having one of the strangest days I’ve had at work in years, but for my new colleagues who I’ve just enthusiastically said cheers to, it’s just another dollar.

What you are looking at is one of the Czech Republic’s best known exports, perhaps only after pilsner and Skodas. Bohemian glass and crystal are embedded deeply into the culture of the country’s mineral-rich west. A winding, bumpy hour’s drive north of Skoda’s Mlada Boleslav home will see you land right in the crucible of where that reputation has been forged.

There are hundreds of glass producers and specialists in this small corner of the world – some big, some small, many very old, but Lasvit Ajeto is one of the newer ones. Founded in 2007, this company’s exquisite crafts work their way out of a modestly sized glassblowing studio in the tiny village of Lindava – permanent population 363 by the latest count, but double that if you factor in visitors. We’re told that up to 300 people can arrive every day for a tour of the works and to see the masters of glass at work – and for one day only, myself. 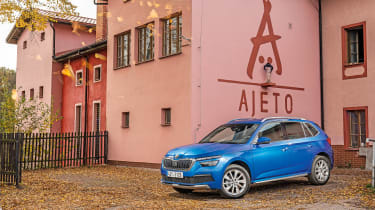 This really is quite a different beat to what is usually required from a work trip, but it’s not without an automotive link. Lasvit’s team of 20 glassblowers have been responsible for casting the Tour de France trophy since 2011, the design of which comes from down the road in Mlada Boleslav, hot from the drawing board of Skoda’s interior design boss. There’s also a theme running throughout the new Kamiq we’ve driven to Lindava that links to the works produced here. The Crystal Lighting LED headlights and tail-lights have been designed to mimic the finer details you’ll find in the glasswork made all over the region.

The lampworkers here clock on at 0530 and finish at lunchtime, to avoid the warmth of the afternoon. It’s only four degrees Celsius today, but during the summer the outside temperatures regularly exceed 30 degrees. When you factor in that the studio floor can ramp up to 60 degrees on a cold day, you can only imagine what it’s like working here in a heatwave.

My crash course in glassblowing begins beneath the main stage, in the cold, grey cellar where the various materials, silicas, sodas and potash minerals needed to begin the process are kept. Lasvit is a small studio, but up to three tonnes of material can go into the furnaces a day. 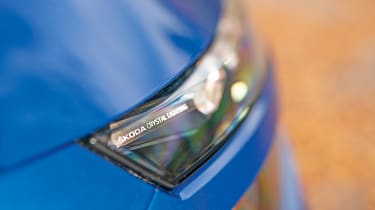 It’s imperative to keep these materials dry, which is why what lurks just yards away is slightly bemusing. Hand-made wooden moulds are still used here and categorically stored away in a dank cave next door attached to Petr’s lair. His woodworking shop, where the moulds are made by hand, is where things begin to take shape. Everything outside the door to his dry, dusty workshop is soaking wet. Fungus grows freely between the stacks of scorched, soaking boxes.

It takes three years of training to be trusted with one of these moulds, and countless years of experience to master them. Operating temperatures of 700 degrees mean they’ll burn up in the hands of the uninitiated like me, but the experienced team upstairs can typically manage around 50 casts before the beech gives in to the heat.

In the main room where the lampworkers cast, blow, paddle and tweeze their creations, the ‘afternoon’ shift before lunch is well under way. Tall, ice-cold steins of beer are propped up on many of the work surfaces. They drink it for the minerals, we’re told, but the amber nectar being shaped straight from the furnaces is far more mesmerising. 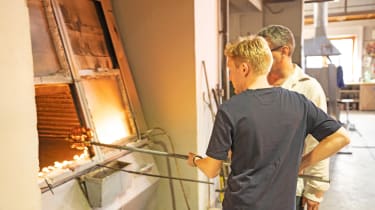 There seems to be no real sense of order as to what’s being made. There’s a randomness and rapidness to the shapes appearing out of the moulds and on the blowpipes that makes the place feel like a kitchen taking orders. The heat certainly rivals one, and it only ramps up on the stage, where the furnaces glow white hot.

The tools are all made in-house, and are somewhat unwieldy if you’re untrained. The blob of menacingly hot molten glass sits heavy on the end of the blowpipe, but the lampworkers seem to weave closely in and out of each other unflustered by the prospect of being branded or worse. I’m not even given a particularly wide berth when it’s my turn to try it myself. It doesn’t require a set of mega lungs to do this, but a lot of back-pressure flows back down the pipe between the pushes of air. My creation is far from the most interesting, though. Rather than casting a wonderful shape, my blows and twists have made nothing more than a large bubble, which is unceremoniously dumped into a rejection bucket.

Had my efforts formed something worth keeping, the next step would have been to place it into the annealing furnace – a vital stage in the process. This is where the glass hardens by virtue of being allowed to cool slowly, the importance of which is highlighted by the sudden shattering of my rubbish bubble. I’m handed another long stick with a set of forks attached to it, on the end of which is a perfectly formed, newly minted glass bowl. 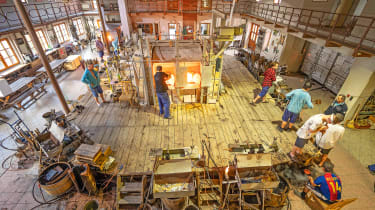 It almost ends in total disaster. Lunging into the furnace with the stick, the bowl slips out of the claws. It begins to roll perilously down the conveyor belt and towards thousands of pounds worth of slowly cooling, extremely brittle works. Thankfully, it stops short of creating carnage, but the chorus of Czech expletives that accompanies this potentially expensive game of skittles tells me it’s time to leave the pros to it.

Once out of the cooling furnace, the objects made here move upstairs to the cutting shop. Here, and with what seems like little regard for health and safety, sawing, sanding and buffering experts work their magic into the finer details of the glass shapes handed to them from downstairs. The heat disappears but the noise ramps up as saws and other cutting machines rev up all day long.

Final inspection takes place just around the corner, and once again there’s a randomness to the gleaming objects ready to be judged. I’m scolded for picking up a similar bowl to the one I almost ruined earlier – not even fingerprints are allowed to show up.

Where does it all end up? Luxury hotels are often the go-to destination for much of what is made here, plus it acts as inspiration for Skoda’s designers. But my bubble won’t be leaving the rubbish pile anytime soon.