The history behind the Skoda Kamiq’s development

Martin Hrdlicka’s family history is intertwined with Skoda, so who better to give us an insight into the Kamiq’s development? 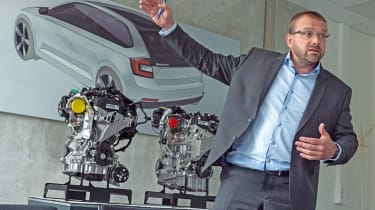 If you’re after an example of how Skoda’s heritage feeds through into its future, five minutes with Martin Hrdlicka should do the trick. He’s the company’s head of powertrain and chassis – so the man responsible for how the Kamiq drives and how many miles it does to the gallon. And yet his head is as full of historical facts and figures as it is CO2 emissions and 0-62mph times.

Hrdlicka’s background is intertwined with that of Skoda. Because the brand we know today was formed in 1925, when troubled entrepreneurs Václav Laurin and Václav Klement needed financial help to survive.

The Skoda company was already a major industrial powerhouse at the time, with interests in everything from aircraft, to military hardware and bridge construction. And when it took over L&K, it parachuted in a certain Karel Hrdlicka – Martin’s grandfather – to improve productivity and steer the company back to profitability.

More than half a century later, Karel’s son Petr – Skoda board member for technical development – took on responsibility for the Skoda 781, the small hatchback that would eventually be launched in 1987 as the Favorit. This car – Skoda’s first front-wheel-drive model – played a key role in convincing Volkswagen to invest in the company. Former boss Carl Hahn admitted that he bought Skoda because of the Favorit – a product good enough to continue selling while he invested in fresh models. 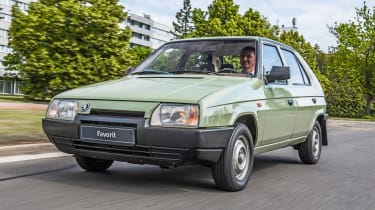 And now Petr’s son’s droll and self-deprecating sense of humour shines through as he laments how his family’s influence at the company has waned over the years. “My grandfather was the overall boss. My father was a board member whose car changed the future of the company. Now I am just the guy in charge of engines and chassis,” he says with a wry smile. Nevertheless, Hrdlicka, who has been with Skoda himself for 26 years, cannot disguise his passion for the brand – even for its home town of Mlada Boleslav. He is immensely proud that at the point of the VW Group takeover in 1991, Skoda was producing three models – and now it makes around 40, across 16 manufacturing facilities.

But his knowledge of the brand’s home town goes back far beyond the days even of Laurin & Klement. “Skoda will celebrate its 125th birthday next year,” Hrdlicka says, “but this year, in 2019, we celebrate 200 years of manufacturing on this site in Mlada Boleslav. Before Laurin & Klement, this site was one of the leading textile factories in all of Europe, with state-of-the-art mechanisation.

“In the cellar of some old buildings here we still have big basins of water that were used as part of the production process. They laid the raw plants there and started to brush them to make the fibres for textiles. Even now, today, if anyone is going across to the development department for a meeting, they’ll say they’re going to ‘cesana’; it’s basically a Czech nickname that means ‘the brush-house’. 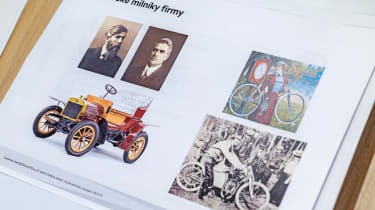 The halls of Skoda’s engine division are a world away from the brush-house, mind. The building that Hrdlicka calls home plays host to 15 engine dynamometers – a sign of the division’s importance. Skoda is responsible for development of the 1.0 MPI engine across the VW Group – a motor that’s sold in more than three million cars per year – plus all of the global automotive giant’s manual transmissions.

More importantly for the Kamiq, Skoda has a factory in Mlada Boleslav that produces 2,400 engines per day – and around 70 per cent of them are the turbocharged 1.0-litre TSI that forms a hefty chunk of the new crossover’s line-up. “If we produce an engine here, we have to evaluate and test it before we ‘release’ it for production,” Hrdlicka says. “In the case of the TSI, it’s an engine designed by our colleagues in Wolfsburg, but we tested it and now we make it here in Mlada – everything from casting the block right through to assembly.” In total, Hrdlicka is responsible for more than 300 people working on powertrain development.

He is also in charge of chassis tuning – and acutely dialled in to what makes a Skoda feel like a Skoda when you drive it. “In general, we are oriented towards comfort,” he says, “so that comes naturally when we are tuning the suspension on our cars. We’re not quite as agile or sporty as SEAT, for example, but we have a lot of customers from countries with bad roads – including, I regret to say, Czech Republic – and those people are close to our heart.

“In the specific case of Kamiq, the car is 30mm higher than the Scala, so we have a completely new set-up with new stability control and recalibrated systems.” 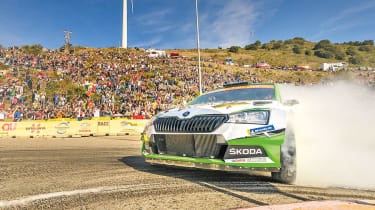 As we visit, the far end of the corridor is resonating to the noise of an engine clearly not designed for everyday use. It’s a motor for Skoda’s WRC2 world championship-winning Fabia R5 rally car, undergoing a hard workout on the 15th, most special dyno in the line-up – one that has the extra grunt needed to cope with competition engines.

Hrdlicka calls our tour to a halt so we can all stand and listen. “The team boss at Skoda Motorsport, Michal Hrabánek, is an old school friend of mine,” he says. “We grew up here around Mlada. And I can remember when we were teens, we went camping not too far from here. I have to say that we were a bit drunk; I remember that we were showing each other how to do proper gearshifts and my shoes started to burn because they were in the camp fire!

“Anyway, we were joking to each other that it’d be great to make Skoda world champion one day. And now, with him in charge of the motorsport division and my team supporting him on engine development, we’ve done it. We’re still friends; we sit together whenever we’re in big meetings with [board member for technical development] Christian Strube.”

More pride. Marketing can convey much about a brand, but talking to someone like Hrdlicka reminds you that companies are made up of people and their stories. And in his case, it is genuinely hard to imagine him being anywhere but at Skoda. The place just wouldn’t be the same without him.