The Skoda Kamiq’s touchscreen showcases the VW Group’s latest infotainment tech. We speak to the man behind the development of MIB 3.0 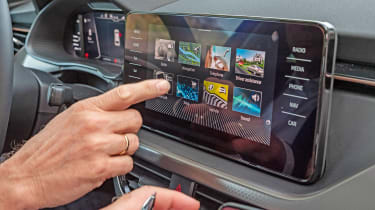 You won’t be aware of the ‘silver box’, but you should be. Buried deep in your car’s dashboard, this is the brain that runs the infotainment system, managing everything from navigation to smartphone integration and even some vehicle settings.

In physical terms, this piece of industry speak is uncannily accurate, because the box concerned is a computer in a metal container, roughly the same size as the old single-DIN stereo that cars used to have in the eighties and nineties. And in the case of the Skoda Kamiq, it’s a world away from the slick, gloss-black-clad display that sits proudly on top of the dashboard.

The Kamiq and its sister car, the Scala, are important vehicles for Skoda’s electronics division, based in an unassuming building in Mlada Boleslav. The two vehicles signal the introduction of the company’s latest mix of software and hardware, known as MIB 3.0 (MIB stands for Modular Infotainment Building set).

Skoda’s head of electronics development, Reiner Katzwinkel, outlines the complexity of the process. “It’s an evolution, of course,” he says. “So we knew from the start that there were some things we wanted to include on top of what we already had in MIB 2.0. But we also looked to see if there was anything we could take away. 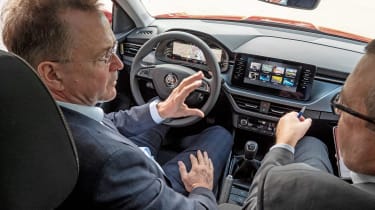 “As an example, we decided that no one is using the 3.5mm auxiliary audio jack any more. So we replaced it with a USB-C socket, which is becoming increasingly common.

“We talk to our colleagues in product marketing and also look at trends. I know we’ve already had people asking ‘Why is there USB-C?’ but this car will be on sale for at least seven years, and for sure there will probably be a USB-D at some point in that period, even if we don’t know anything about it yet. So you need to think long-term.

“Right now, the biggest thing that customers are asking for is a larger [infotainment] display,” Katzwinkel adds. “I think we’ve managed it quite well; we have a 9.2-inch screen that is the largest in the class, and even in a relatively small car, it fits quite well.

“Our friends and colleagues in the marketing department always want the biggest display possible. They’re telling us, ‘Hey, you can have a 49-inch television for 400 Euros. What’s the problem? Why is the car system so expensive?’ It’s so costly because it has to survive outside of your front room. “Our display has to operate from minus 30 degrees Celsius up to 80 degrees,” Katzwinkel explains. 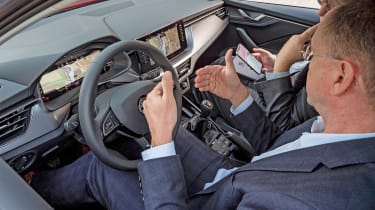 “We also do an impact test with a five-kilo ball, after which it must have no splintering. Then, once we have settled on a spec, we have to talk to our colleagues about how to fit it, how to mount it and how to manufacture it. We’ll be making huge volumes of cars with this system every day, and the infotainment screen cannot hold up the production line in any way.”

The silver box starts out as something even more rudimentary, because engineers do the initial work on an emulation rig. It’s basically a PC with a touchscreen, housed in a rack that can be trollied around from department to department, much as an old school computer used to get wheeled between classrooms. This way, engineers are able to test their respective modules while also ensuring that they ‘play nice’ with each other.

“Avoiding a conflict is one of the most important elements,” Katzwinkel says. “Not all of the systems are interconnected, but in some cases the amount of data that needs to be exchanged is so big that you have ethernet connections, just like you do at home or in the office. And we have to be sure that these systems all work, independently and with each other, from the moment the car is first switched on until the end of its life.”

Of course, the more cars become connected, the more of our data they will store. “Safety and security are very important for us,” says Katzwinkel. “The industry has done a lot to work against theft – in other words the vehicle’s self-protection. But the problem is the hacker – someone who could use an always-connected car to get through to the back end and then access the data. This is an issue we have to cover, to make sure nothing happens.” 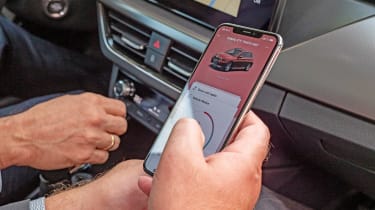 We ask for a rough timeframe for the entire development of the flagship MIB 3.0 unit in the Kamiq. “Three years,” he says. “From the initial phase of deciding what we want, to then looking at how it could be incorporated, then pitching it out to suppliers. And that’s just hardware; the software development is running in parallel with that, because we don’t have time to wait for the physical item to be settled.”

Even the processors that power the unit take time; they’re custom-designed automotive-grade items, not easily comparable with your home PC. But they need to get through a testing procedure that lasts a full year before they can be considered for inclusion in the silver box.

And on top of it all lies software, which is a notoriously difficult item to sign off in a fixed state, because of its constant development. “We have concept samples about three years out, then simulation boxes to develop and test the HMI – the interface,” Katzwinkel says. “Then we have a B-sample, which shows 100 per cent function, and that’s more or less two years out. You need to subtract a year of testing, in total. And even then, all the while the software is evolving. And the car is changing too; even the Kamiq has changed during its development period, and we had to make sure, on the fly, that it all worked together.”

If you think that working out the user experience (UX) starts with, well, moving elements such as buttons around a dummy screen to see how well (or not) it works, you’d be right. “That bit of the work is normally done after we’ve made our analysis,” Katzwinkel says, “but yes, you do need to distribute the elements on the screen. We have a UX team and an HMI team, and they have some style guides, such as the upper row being for information and the lower row being for more general items. In the future we’ll have to incorporate even more – for when the screen is being fitted to a car with plug-in hybrid versions, for example. 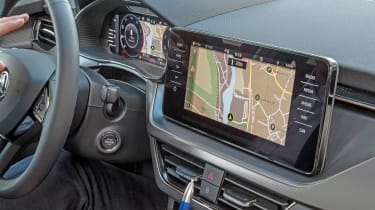 “But in general, we have principles that have evolved over time. There are also rules on Apple CarPlay and Android Auto, elements that are very popular with our customers. They have specifications and if you’re too small, for example, they’ll reject you.” As it turns out, the Kamiq is pretty much the first car in its class to allow you to use CarPlay wirelessly – a coup that Katzwinkel is particularly proud of.

When the software development is properly trundling down the tracks, Skoda pulls in the general public to help confirm its theories. “We have customer clinics with 30 to 50 people,” Katzwinkel reveals. “We’re always learning what the customer is doing and then we react to that. In the Kamiq’s system, across different languages and regions, and including the different display sizes, we have 900 screens.

“But the goal is that the first 10 screens are the ones that matter to the vast majority of customers; they’re happy with that and can find the information they need. For the people who want to do more, they can go deeper. So we focus on making the first levels as easy as possible. We’ve tried to reach the best in class, in that respect. And I believe we’ve done it.” 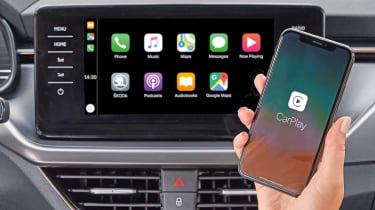 MIB 3.0 also marks the point, it seems, where Skoda’s responsibility to, and interaction with, its customers continues long after they’ve got out of the car, locked the door and walked away. The Kamiq has always-on functionality, so it is constantly piping kilobytes of data back to headquarters. And the way in which owners access that data is controlled by Skoda – still a car maker, but now also a smartphone app software developer.

“I think, in terms of customer demand and how it works, this is a really big step for us,” Katzwinkel says. “The car has a built-in SIM with LTE data connectivity, and its data is transmitted to, and stored by, a VW Group back end.

“Then the customer is able to access this data and use a range of features. You can see the mileage, the fuel level, the current health status of the vehicle. You can find the car on a map. Or if you’re lending it to a loved one, you can see when they’re leaving a certain geographic area.

“For me, personally, moving into smartphone apps was moving into a whole new world – the IT world. The end-to-end connectivity is quite complex. In the car, we have connections between modules and it’s controllable. But when you leave the car, it’s another world for a car developer. It was a real learning curve to bring these different parties together. But we managed it.” 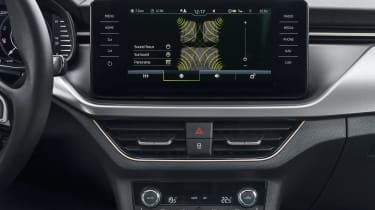 Wired for sound: Kamiq is designed for a younger customer than its larger stablemates. But the audio controls allow sound to be focused on one, two or four seats. 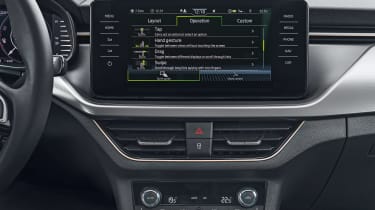 How to interact: A key part of the push for usability with the new MIB 3.0 interface is the way it allows people to choose what their gestures and swipes do within the system. 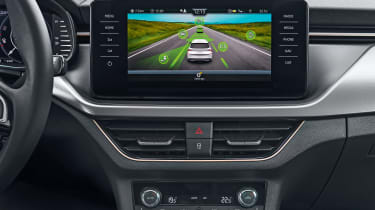 Playing it safe: Plethora of driver-assistance tech can confuse some owners, so Kamiq’s infotainment screen is able to show which of the systems is operating and what it does. 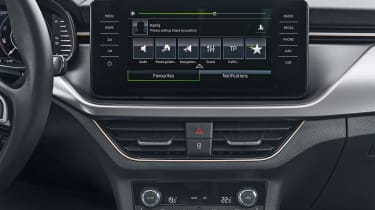 The personal touch: MIB 3.0 recognises that cars are often shared between more than one person – so it can remember settings and favourites that are specific to ‘profiles’. 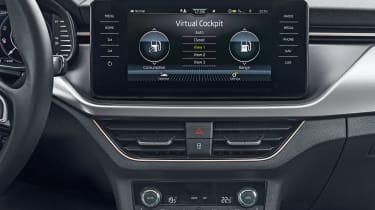 Cross-control: The central screen has standalone features but it can also affect other elements of the Kamiq – like customising the layout of the digital instrument panel.