New Skoda Kamiq: behind the scenes at a Skoda dealership

The arrival of the all-new Skoda Kamiq is important for its dealers. We visit one franchise to find out what happens behind the scenes 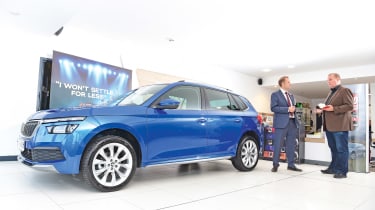 “Two of our guys have actually come in today just to see the Kamiq when they should be on holiday,” says Paul Abraham, Franchise Director for Marshall Motor Group.

Actually, Paul is also officially on holiday when we meet up at Marshall Skoda in Newbury, Berkshire. But such is the excitement about the new Skoda Kamiq among the dealer network – many of whom have yet to see one in the metal – the news that we’re turning up with a Race Blue Kamiq SE L is an opportunity not to be missed.

To be honest, we weren’t expecting that level of excitement from dealers, but then a new Skoda is big business, especially for a sizeable dealer group such as Marshall, which has invested heavily in the Czech brand. “You used to need a Skoda,” Abraham explains. “Now you want one.”

We decide to get to the sharp end of the car business – the showroom floor – to learn about how dealers prepare for the arrival of a new model. “We first heard about a new, small SUV about 18 months ago,” says Abraham. “We didn’t have the name at that point, we just knew there’s a new car coming to the sector. On our internal communications we had a heads up, and saw a design sketch. From there Skoda told us that it’s going to be shown in concept form – that was the next stage. 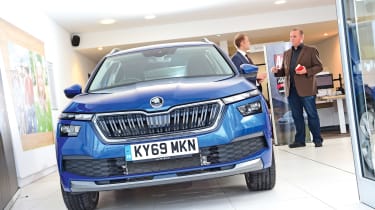 “We first got to see the car at Skoda’s international world dealer conference. You generally get to see the car in pre-production form at these events, in secrecy, obviously. Skoda will give us a lot of sector information, so there will be a lot of information about the size of the sector and how fast it’s growing. For the Kamiq we knew that it sits in what’s by far the fastest growing class, and how that sector is evolving. We also get some insight into what the customer base will be, so you can start, to a degree, gearing up for it.”

While the dealers will always feed back on what they see, they get more involved further down the line when it comes to setting specifications for the different models. That tends to be done at dealer council level – a small group of eight dealers that represent the network in different areas of the country. As Abraham explains: “The manufacturer will know exactly what the market demands are, but we definitely get consulted around specification. Less so about pricing, but certainly whether an SE L will have an electric tailgate, for instance.”

By then, dealers must find it hard to resist the urge to talk to potential customers about a new car, but they have to wait.

“You generally wouldn’t go to customers until there’s some market release,” says Abraham. “We have to wait until we get a ‘release of secrecy’. Once we get that permission, when it becomes public, when the specs become public information, we can start talking to customers. We have a quarterly newsletter, so quite often we will time that around that news.” 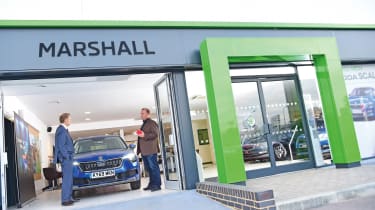 Dealers then start to think about how they can market the new cars to their customers and identify a customer base. “It doesn’t really start to get intense until probably two to three months before the UK launch,” Abraham tells us, “But our internal marketing team’s been on this for about four to five months. So we have a clear plan.

“It’s literally a timeline, but you’ve always got to be a little careful in case there are any issues along the way in terms of delays. You wouldn’t be promising launch days until the brand designers are happy and cars are in the UK. At that point Skoda will tell us when the launch cars are coming, so then we’ll organise launch evenings and who we’re inviting.

“We’re also pretty active from a social media perspective. When the brand starts to let snippets of information out, we’ll release it, too. When Skoda released its teaser shots with the Kamiq’s lights in darkness, we followed that 20 minutes later – we always use the slipstream effect with launches. You wouldn’t ever want to jump ahead, plus you want to make sure you use the same language.”

So who does Abraham think is going to be buying Kamiq? “I think there are a few different customer types to line up,” he says. “Age-wise I would say thirties to mid-fifties, but we may fall under that. We’ll probably see lots of new customers, too – in terms of incremental customers it’s going to be very high.” 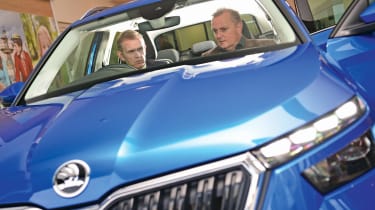 Kamiq gives Skoda something its dealers and customers have been crying out for. “For us, the excitement I guess, is that we’ve now got a direct replacement for the Yeti,” he explains. “Yeti had its own character, but I think Kamiq offers some of that, too. It’s unique; it kind of sits outside of some of the usual small SUVs. It’s good to have a little personality.”

Abraham tells us there’s a fair bit of pent-up demand from Yeti owners who feel it’s about time they changed their cars – the model disappeared in 2017– so is Kamiq the answer? “Yup. Absolutely. Categorically. Karoq wasn’t the answer because that’s just a little bit bigger than Yeti and the Yeti customer wants height not size. Interior space is important, so if you look at the space of Kamiq, which looks to be incredibly strong, that will appeal.“

At that moment Abraham breaks off and heads for the back seats of the Kamiq, before coming back with a smile on his face. “Okay, that answers the question,” he says. “It’s got the same internal headroom as an Octavia.”

Space is something that also applies to showrooms. And with Kamiq the third car in Skoda’s SUV range, how do Skoda dealers fit everything in? “All our facilities are the very latest, so space-wise we’re pretty good. We can display all the cars including Kamiq, plus two more,” says Abraham. 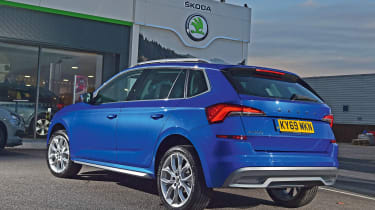 Marshall Skoda also makes use of tech to ensure customers can see cars in different specs and colours, and compare them with rival models, too. As Abraham explains: “We’ve now got a digital system, which can do direct comparisons. So if a customer is asking if they can get their golf clubs in the boot, we can put cars side by side on the digital assistant. In terms of product knowledge, it’s been a bit of a game-changer for us.”

So everything seems set at Skoda’s dealers, but what does Abraham think is going to make the Kamiq easy to sell for his team? “Its strongest point will be space,” he says. “But for me personally I look at that car and think, ‘That looks fantastic’. It just looks great from every angle.

“You don’t have beautiful SUVs, do you? You have beautiful coupés. But you can have terrific-looking SUVs and I can’t think of anything much better than this. That will create the pull, but of course it’s got substance; it’s got space, tech, the dash looks fantastic, quality’s great.”

With that, Abraham turns to the showroom and points at someone else taking a close look at the Kamiq. “That’s Steve,” he says. “Steve retired three months ago – he doesn’t even work for us any more and he’s come to see it!” It seems word is already out that the Skoda Kamiq is coming to town.