Skoda’s concepts strongly hint at models that are just around the corner. We got a chance to drive three recent show stars 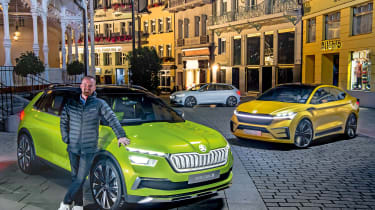 For most manufacturers, a concept is a complete flight of fancy. It’s an opportunity to create a car that’s spectacular and outrageous, but something that will usually have only little – if any – influence on its road vehicles in the near future.

It can be a chance to showcase technology which doesn’t even exist yet. If they’re feeling really cruel, brands can show off models that look pretty much ready to jump straight into showrooms, but then never make production. Skoda, on the other hand, likes to give us things to really get excited about. Its one-off show stars give us a huge clue towards the look of its next production models.

And it’s a practice that’s gone on for almost 20 years, as the manufacturer’s back catalogue shows. The quirky Yeti SUV was previewed by a pair of chunky concepts four years before its official release; the Mission L and Vision V became the hatchback and fastback versions of the Rapid; and the Vision C of 2014 showed us the third-generation Superb that followed a year later. 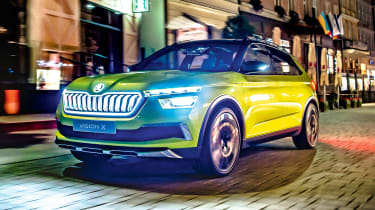 It’s a trend which continues to this day. So to study the brand’s future models and design direction, Auto Express was invited to drive three of its most recent concepts in public.

It’s not unheard of for a manufacturer to give us a chance to drive its show stars, but rarely like this. This is no typical drive around a dreary warehouse on a bleak industrial estate. Instead, we’ve gone to one of the most beautiful regions that Skoda’s home nation has to offer. Karlovy Vary is a small spa town sat in the north west of the Czech Republic, close to the German border. If you’ve ever watched the film Casino Royale, it might look familiar; several of the town’s landmarks, notably the stunning Mill Colonnade and Grandhotel Pupp, featured in Daniel Craig’s first Bond appearance.

It’s one thing to see a concept looking pretty on a show stand, but out in public there’s some greater context to them, and the cobbled streets and 19th-century Bohemian architecture conspire to make these space-age concepts – a riot of lurid colours and razor-sharp LED lighting – still more stunning. Even more so at night,when our drives take place. 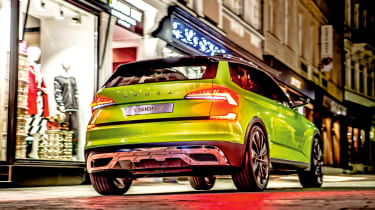 The first we approach is the Vision X. Revealed at the 2018 Geneva Motor Show, the car bears a striking resemblance to the new Kamiq compact SUV, and with good reason; the design of the Kamiq had already been signed off for production before the concept was finished. The major change between the two is that the Vision X’s wider footprint gives it a much sportier stance. It’s a shame that showroom-ready Kamiqs don’t come with the lime green metallic paint, nor the glowing grille and Skoda logo, though.

In contrast to the Vision X, the Vision RS looks low, sleek and menacing. It showed us how the rather conventional Scala would look, but the huge alloy wheels and cartoonish bodykit make it look altogether more purposeful than the sensible family hatch.

Beyond the styling hints each car offered, they nudged us in the direction of Skoda’s future technical plans, too. The Vision X pairs a 1.5-litre petrol engine that’s engineered to use CNG (compressed natural gas) with a 48-volt mild-hybrid powertrain. An electric motor on each axle means the X could potentially operate as a four-wheel-drive hybrid or in pure-electric mode. 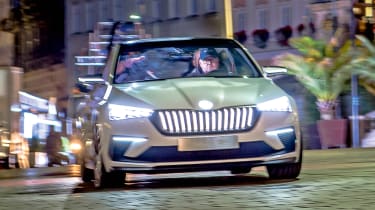 The Vision RS brings a more performance-orientated take on the electrified strategy. The 148bhp 1.5-litre TSI engine that’s used widely though the Volkswagen Group receives a boost from a plug-in hybrid system, to increase the total output to 242bhp. That shove is sent through the front wheels via a six-speed dual-clutch gearbox to deliver a 7.1-second 0-62mph time and a top speed of 130mph. Combined with a 13kWh battery pack, it means that up to 43 miles of all-electric running is possible.

But undoubtedly the most exciting powertrain sits beneath the striking Vision iV. This swooping coupé-like SUV previews the brand’s debut of the MEB platform, the fully electric architecture that will first see production in the Volkswagen ID.3. The Skoda has a twin-motor set-up that makes 301bhp and promises a range of 310 miles through an 83kWh battery pack. And the good news is that, true to Skoda’s previous form, we will see a production model like this. Exterior designer Omer Halilhodzic tells us that the Vision iV’s design is “85 per cent representative of the production car”.

When that model breaks cover late next year, a more conventional SUV shape is likely to appear first, followed by the mini-Lamborghini Urus shape of this concept. Expect the glowing Skoda lettering on the wheels to fall by the wayside, and for some conventional handles to find their way onto the concept’s flush doors, but otherwise, very little will be altered for the production car. 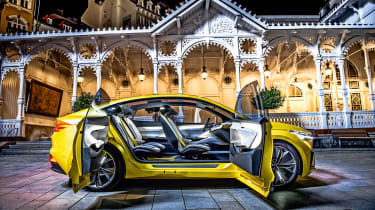 Inside, however, the iV is more of a flight of fancy. The basic architecture follows quite closely the production model’s, but it’s the detainling that sets it apart. Every surface is trimmed in expensive-feeling material; vegan Alcantara is used in many areas to show the potential use of sustainable materials in future production cars, while elsewhere there are exquisite bespoke metallic pieces. A rather bizarre side effect of all this high quality is that it makes the striking yellow floor mats look less special.

There’s not much that can be gathered from the way these concepts drive; they’re designed to look pretty on a show stand rather than built to the rigorous standards of road cars. In fact, we’re grateful for Karlovy Vary’s hot springs between takes, because it’s a cold night, and the concepts don’t have any heaters. Still, it’s hard to detract from how special these models feel, even when they’re driven at barely 10mph.

And the exciting thing is that the electrified future will give designers, who are no longer constrained by fitting bulky combustion engines under the bonnet, more creative freedom to shape wild designs like the Vision iV. Want to find out what comes next? Well, Skoda has shown that its future motor show stands will be a fairly safe place to start.