Double vision: how the Kamiq inspired the Vision X 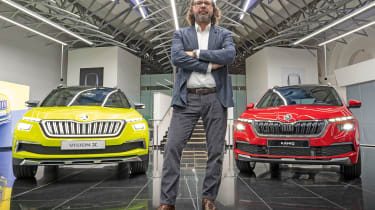 The car industry has a pretty well-set formula on how to bring a design to market. First, do an outlandish concept that grabs the attention. Second, struggle like hell to turn it into a production car while still retaining enough of the show car’s glamour.

This is not how Skoda does things. Because while it is true that the two cars you see here, Vision X and Kamiq, are closely related, it was the production car that was created first. Only when Skoda design boss Oliver Stefani was happy with the final Kamiq that is now arriving in showrooms did he then turn to his team and tell them, “Make that into a concept car.” This approach is not unique but it is very unusual. All the more so because in the case of Kamiq, this is a car that has ushered in a new design language for Skoda, especially around the front end.

“We started work on this Kamiq with some internal concepts – vehicles you’ll never see,” Stefani tells us as he prowls between the two cars in the design studio’s ‘showroom’ in Mlada Boleslav, in the Czech Republic. “At the start they weren’t even this type of vehicle, actually. Then once the board members liked the direction that we were taking, we pushed forward.”

The result is a car that crosses classes. Indeed, Stefani himself resists calling the Kamiq an SUV. “In my mind it’s a CUV, a crossover,” he says. “It works without the typical SUV cladding.” And it is a vehicle that sits apart not only from the majority of its rivals in the crossover class, but also from Skoda’s established SUV line-up: the Karoq and the Kodiaq. 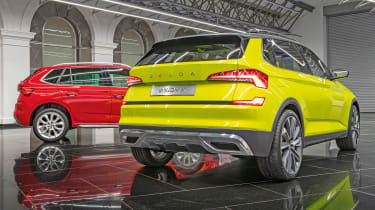 “There was always a strategy to pull this car apart from the rest of the range,” Stefani says. “There’s always brand identity, so you want some Skoda elements, but then also product identity. When the second of those principles is not strong enough, that’s when we get criticism from journalists or, more importantly, the customers.”

When Stefani joined Skoda just over two years ago, the Kamiq production car was almost finished – apart from one significant element: the front. “I think it was an early test for me,” he chuckles. “The car was made but they weren’t happy with the front, right up until the last moment. I had to sort it out and it was a challenge, because lots of it was already done.”

His tactic at the time was simply to turn Skoda’s established SUV headlight layout upside down. “We put the daytime running lights as a strip at the top,” he says, “and then the main headlight units sit underneath. On Karoq and Kodiaq it’s the other way round. This worked for us because it gives a distinctive look and also differentiates this car from the others. The hardest part was making the main units small enough to work; they’re quite intricate and very compact for a car of this type.”

Along the flanks, Kamiq remains clean and relatively uncluttered by complex surfacing. “Our design should be simple and understandable,” Stefani explains. “When we receive some portfolios from students and see that they can draw a Skoda, we consider this a good sign. I think you have a good and understandable design if you can make a cartoon out of it, with only a few lines. Remember the Beetle? [Stefani certainly does – he worked on the modern Beetle during his spell at Volkswagen] With three circles; it was a super design. This is what we’re aiming for.”

There is some complexity in the crossover, though: in manufacturing. For even within the Kamiq’s simple lines, there are crisp creases and some of them go across shutlines such as door openings or the fuel filler flap. It’s the sort of thing that gives the teams at Skoda’s pressing plants sleepless nights. 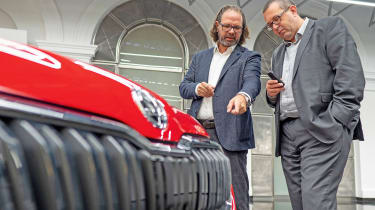 Stefani grins when this is pointed out to him. “Well, we have in the Volkswagen Group, including at Skoda, the ability to make things in a very precise fashion,” he says. “And one thing design can do is make this visible. So if we can do something like this, with a crisp shape that goes across a shutline, then people should expect it from us. In a way, it’s another reflection of the Czech crystal: very clean but sharp lines.”

At the rear, the Kamiq is only the second Skoda to use full-width lettering instead of a company badge. Stefani explains the reasoning behind the switch. “The idea for this originally came from discussions with our Chinese colleagues,” he says, “because the Skoda logo isn’t so well known over there. That’s how we first started thinking that maybe we should write it out. Then I was in the museum one day and I saw that there were a lot of cars in the past that didn’t have the logo but had writing, not only on the back but also on the front. So we tried it in a presentation with lettering and people liked it. I think it’s about Skoda becoming a bit more mature, and having confidence in itself and its brand.”

He points at the letter ‘S’, which has the distinctive canon on the top, denoting the local pronunciation of ‘Shkoda’ instead of ‘Skoda’. “We could have taken that off,” Stefani says, “and in engineering terms it’s actually quite a hard thing to do, because the physical join at the top of the S is very small. But it’s a sign that we’re proud to be a Czech company. I’m not so familiar with the Czech language [Stefani was born in Germany] but Skoda has been here 125 years; why not celebrate that, celebrate where we’re from?”

A rough bit of maths gives an idea of the timeline involved in the creation of the Vision X show car. Stefani started work at Skoda on 1 September 2017 – and got straight onto the job of finishing Kamiq. And yet the production car’s concept cousin made its debut at the 2018 Geneva Motor Show, barely six months after the brand’s new head of design got his feet under the desk.

For the transformation into show car, Stefani encouraged his team to play with materials and more complex finishes, but to keep the basic shape unchanged. “The ingredients to make a nice car are relatively few: big wheels, low roof, small glass area. But it takes a little bit more than that. The Vision X has the same core lines as Kamiq,” he says. “We don’t want to cheat about interior space; this is one of the fundamentals of Skoda and, if we just made Vision X lower for the sake of it, then it wouldn’t really be one of our cars. 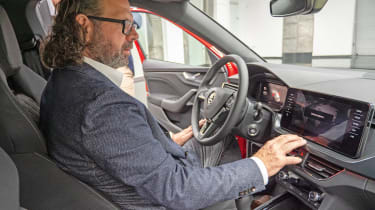 “So the concept is the same height, basically, and then we add a bit of metalwork at the sides – so it’s perhaps 25mm wider at each side – and go up an inch in wheel size. That’s about it. The window graphic, the overall design is something that you’ll find on Kamiq.”

It sounds simple, but restricting the overall lines means that the devil is in the detail. “We played a lot with the crystal idea in the glass, and also in the front grille,” Stefani says. “The crystal industry is very strong here in the Czech Republic and we worked with different local suppliers on the show car.”

So it’s here where you can see the Skoda designers have allowed the Vision X to shout a little – as much as is necessary for a car that has to attract attention in a motor show hall full of other concepts. There’s a little more drama to the lower air intake and, of course, that backlit main grille celebrates both the Skoda brand identity and Czech glass tradition. We wouldn’t be entirely surprised if a Chinese-market Skoda ended up with something like it within the next few years.

Inside, it’s clear that Stefani isn’t telling any fibs on packaging. Vision X has the same feeling of space as the Kamiq and even the fundamental dashboard layout is very familiar – including the wide central touchscreen which, Stefani claims, “democratises” the infotainment system between driver and passenger. The choice of materials is significant, too, with more fabric than plastic – a trait that Stefani believes is something Skoda can work more on in the future. “We all have different tastes in our homes,” he says, “but I don’t know anyone who has shiny black finishes with chrome in their living room. We want to bring ‘home furnishing’ a little bit more into the car.” 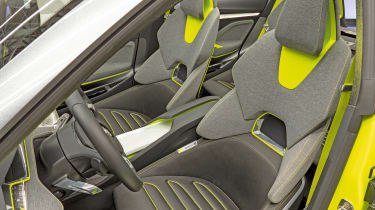 There is one area where the two cars differ notably: paint. Vision X’s spectacular green-yellow hue would be a bold choice for any customer, but it does have a contrast metallic-grey finish on the roof. Why, we ask, wouldn’t Skoda consider offering that as an option on Kamiq?

“We don’t do that. At present,” Stefani says. “But we have researched it and we know, not just from our own work but from some competitors, that it does work. Maybe in the future, though, huh? One day we’ll maybe convince production that it’s a good idea to have it. Almost every company is playing around the C-pillar with something. And I do think it works very well on the Vision X.”

It’s a sign, perhaps, that cars never stand still: they evolve. Stefani clearly has a head full of ideas for how Kamiq can mature and adapt to satisfy more of Skoda’s customer base and attract new buyers to the brand. When asked if he’s working on a Sportline edition, or playing with body cladding to take the car’s look more towards that of an SUV – for those who want it – he just giggles.

The Kamiq, it seems, is a starting point that can be taken in various directions – just as it was turned into Vision X.