The Skoda Kamiq’s interior is logically laid out and full of tech, but it’s low on visual appeal 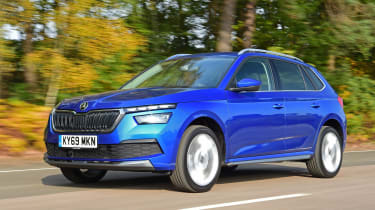 While few will criticise the Kamiq’s exterior design, fans of the older Skoda Yeti might think this newer car is just a bit too conventional in its shape and style. Like many of its rivals, it looks like little more than a hatchback on stilts – albeit one that offers a hugely practical interior and loads of really clever features.

It’s built on the VW Group’s MQB platform, and as a result feels stable and secure to drive. That also means it benefits from a flexible cabin with space for five adults. The dashboard layout is easy to understand, if a lacking in flair, but saying that, it’s likely to offer plenty of appeal in the target market of family buyers prioritising practicality. Quality is very good; the Kamiq feels better built and more sophisticated inside than the equivalent Volkswagen T-Cross. 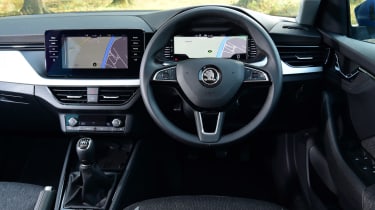 Base S-trim versions feature a 6.5-inch touchscreen, while SE versions upgrade to an 8-inch display. The top-spec SE L and Monte Carlo models include a larger 9.2-inch console, but all offer sharp graphics and an easy-to-understand user interface. The screen responds quickly to your inputs, and while it’s not the quickest system for loading times, it’s fast enough that it’s never frustrating. You get Android Auto and Apple CarPlay included as standard on SE cars and above, which works very well because the screen is so up-to-date.

Wireless smartphone charging is an option that works well with compatible smartphones, although it’s pricey at £260. This function only costs £105 on a Volkswagen T-Cross, although you have to pay £650 for the privilege on the Citroen C3 Aircross because it’s part of an option pack. Apple CarPlay can work wirelessly in the Kamiq, too.

One of the best parts about the Kamiq’s tech is the 10.25-inch digital dash. It’s similar to the Volkswagen T-Cross’ display, but the graphics look more modern. It’s included as standard on SE L and Monte Carlo models – otherwise it’s a £570 option on SE models. You can’t specify the system on entry-level S cars.