We drive Skoda’s crucial new Kodiaq in petrol form and find it impresses almost as much as the diesel. Should you buy one? 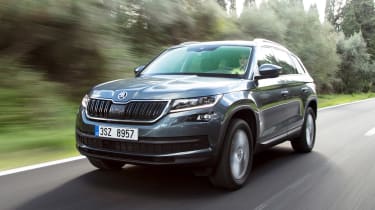 The Skoda Kodiaq is an impressive amount of car for the money, and powered by the 1.4 TSI is a smooth performer. For city dwellers or those doing low miles it will be a great fit. However, the torquier, more effortless and considerably more economical diesel is still a better fit for an SUV of this size.

Put off by the ongoing VW Group emissions scandal? Skoda is convinced that most Kodiaq buyers won't be, and that the bulk of sales will still be the diesel powered models. You can read what we thought of the best-selling diesel here, but now we’re trying one of three petrol engines offered in the Kodiaq.

Out of the far smaller percentage of buyers expected to choose a petrol Kodiaq, this middling 148bhp 1.4 TSI is likely to be the biggest seller. There’s also a 123bhp version of that engine and a 2.0-litre TSI with 177bhp – plus potential for a hot vRS variant later on. Here, the engine is mated to a six-speed DSG gearbox and four-wheel drive (front-wheel drive and a manual gearbox is also available). With seven seats and in higher-end SE L spec, our test model will set you back just over a fraction over £30k. 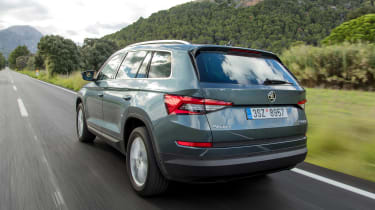 You might expect a 1.4-litre engine to feel breathless in a seven-seat SUV, but the Kodiaq isn’t a heavyweight, tipping the scales at just under 1.6 tonnes in this guise. As a result it feels swift enough for a car of this type, revving cleanly and pulling from low down in the rev range without too much effort. As we’ve experienced with this engine in other powertrains, it’s punchy right to the redline, too.

That was driving two-up, however; expect the Kodiaq 1.4 to feel notably more lethargic with two adults, five kids and tonnes of luggage on board. We’d recommend the DSG gearbox for this job; the manual shift is pleasing to use, but the autobox’s intuitive responses make it easier to keep the engine in the power band more of the time.

This engine has a couple of aces up its sleeve, however. The first is exceptional refinement – at idle from inside the car you’d barely know it was turned on, and it only gets raucous past 5,000rpm. The second is that the 148bhp version comes fitted with the VW Group’s ACT cylinder deactivation tech, allowing the car to shut down two cylinders on light throttle loads to help boost efficiency. Despite this, it claims 39.8mpg combined, which is fine but unremarkable. But the 1.4 TSI is expected to be cheaper in terms of company car tax rates than the diesel. 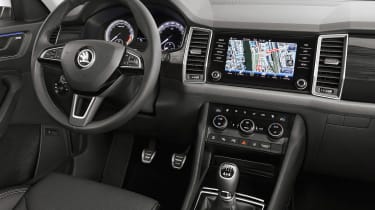 The rest of the package is unchanged from the diesel, and it remains a seriously impressive all-rounder as a result.  Despite appearances it’s more compact that you might expect, making it easy to place on the road. Our car did without the Dynamic Chassis Control system (an option we’d recommend ticking), meaning the ride has a slightly firm edge over big bumps but it still controls body movements better than a Nissan X-Trail. Positive (if light) steering and good wind and road noise insulation top off a well-sorted SUV. 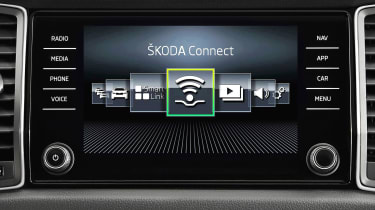 More importantly, the Kodiaq’s interior is as pleasing a place to sit as the Superb. The materials are of a similar quality, while there’s a sense of order and logic to the controls. Teenagers will squeeze into the rearmost seats with the middle row slid forward enough, but they’re mainly for kids – like other seven-seat SUVs in this class.

Still there’s plenty of space in the other five chairs, while the seating layout is nicely flexible and the boot is a very good size. The infotainment technology is also bang up to date and intuitive, plus there’s no less than thirty of Skoda’s neat ‘Simply Clever’ touches dotted about the cabin.