Will Skoda's new saloon live up to the promise of its name? 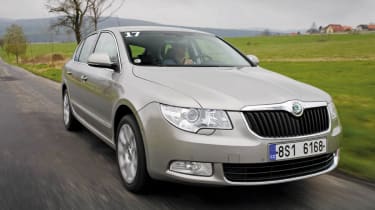 Aimed at the very heart of the family car market, the Superb does offer something different, even if the hatch/boot combination is a bit of a gimmick. The Skoda is not very sporting, but it rides well and has a comfortable, spacious cabin. And although it’s slightly pricier than the outgoing model, it’s bigger with more kit and better quality. Yet the basic premise of a big car for small-car money remains, and will still hold appeal for a lot of buyers.

It takes a lot of confidence and a very straight face to call your new car the Superb. In the Thirties, Skoda used the name on a luxury saloon, but when the Czech firm’s Volks­wagen Passat-based executive appeared wearing the same badge in 2002, the world did a double take.

For a company that had only just shaken off its cheap and not-very-cheerful image, this seemed rather ambitious to say the least! But the Superb sold well. Now, six years after it arrived, a replacement is here.

And it’s a luxury saloon with a difference – a full-size hatchback with a boot that opens separately. The rear hatch has electro-mechanically locking hinges halfway along its length.

On the bottom edge are two buttons. The one on the left pops the bootlid, but if you press the other first and wait for the high-level brake light indicator to stop flashing, the left-hand button opens the entire hatch­back. It sounds contrived, but works fairly well when access via the bootlid is re-stricted, even if it is slow to operate.

Elsewhere, the Superb mixes old and new Passat platforms, plus parts from the current Octavia. The big news is that Skoda expects to sell a high proportion of 4x4 variants, so the rear axle comes from VW’s 4MOTION system. The two-wheel-drive versions also get a new axle which is claimed to produce a quieter, more comfortable ride.

It’s a not particularly distinguished-looking car, but inside the Superb is classy with smooth soft-touch plastics, a well organised and designed dash, and lots of cubbies in the front.

Room in the rear is very generous, with more leg space than you’d ever need and thoughtful touches such as umbrellas that slot into the doors, a trick inspired by Rolls-Royce’s new Phantom. Headroom in the back is fine for anyone up to six feet tall.

Air-con is standard, while up to nine airbags and electronic stability control bolster safety. The Superb also debuts VW’s optional adaptive lighting system. As well as illuminating round corners, it extends the beam spread at low speed and increases the range as the pace picks up.

Skoda thinks that the single-cam, 138bhp turbodiesel option will be the most popular. It comes with six-speed manual or optional six-speed twin-clutch DSG semi-automatic. Either gearbox works well with the refined engine, which provides brisk acceleration and low noise.

As is the case in all the other VW Group cars it’s fitted to, the DSG set-up works better as an automatic than as a manual. Even the optional steering wheel-mounted gearchange paddles are fussy and hard to find.

The ride is exceptional, the low-profile tyres soaking up punishment without transmitting thumps and bumps back to passengers. Yet it’s at the cost of softer handling, which will not please keen drivers, plus a slight nervousness at motorway speeds. And while the steering is light and direct, it doesn’t provide the same feedback or sportiness as a Ford Mondeo.

However, while the brakes feel a bit spongy at first, they are more than capable of stopping this 1.5-tonne car. They round off the Superb as an impressive proposition, and one that confirms Skoda as a major player.

Rival: Ford Mondeo The blue oval’s contender has the same sort of interior space as the Superb, but it beats the big Czech in terms of ride and handling. Yet Skoda has the advantage of a novel hatch/saloon arrangement and aims to offer a slightly better specification, while matching Mondeo prices.