The Skoda Superb has been one of our firm favourites for a while, and with the wintry weather conditions causing havoc, there was no better time to get behind the wheel of the 4x4 version. 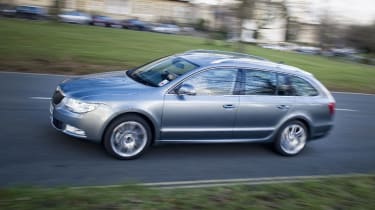 Huge, upmarket and unfazed by the worst the UK winter can throw at it, the Superb Estate 4x4 is one of Skoda’s best models. If you’re doing high miles, you’ll want the 2.0-litre diesel, but this turbocharged petrol is still quite economical and good to drive. There aren’t many rivals at this price that offer so much ability.

If you want a car that can do it all, what are your choices? Well, a BMW X5 would be nice. And a Range Rover Vogue would be even better. But if, like most people, you haven’t got upwards of £50,000 to spend, take a look at Skoda’s Superb Estate 4x4.
At £25,105, this Elegance-trimmed 160bhp 1.8-litre turbocharged TSI version isn’t exactly what you’d call cheap – but for the price, it’s one of the most flexible and capable family cars on the market. We got behind the wheel to see how it stacks up.
Video: watch CarBuyer's video review of the Superb Estate
[[{"type":"media","view_mode":"content_narrow","fid":"68510","attributes":{"alt":"","class":"media-image"}}]]
Open the boot and you’re greeted by a gaping 633-litre load bay that can take four large suitcases with ease. Fold the rear seats down and you’ve got an enormous 1,865 litres to play with – enough room for a grandfather clock, and as much space as the latest Mercedes E-Class Estate.

In fact, it feels very much like a cut-price version of the German car. The cabin is beautifully made and maturely styled, while it’s quiet and composed on the move with a floaty ride that irons out bumps in the road. Factor in the smooth, punchy 1.8-litre turbocharged petrol unit, with its long sixth gear, and you’ve a top cruising companion.
Passengers will be happy, too. Outside of a long-wheelbase Mercedes S-Class, there are few cars that offer as much space in the rear. And Elegance trim brings heated front leather seats and cruise control, as well as Bluetooth and MP3 player connectivity.
But the real trump card is the Haldex-equipped 4x4 system. You certainly notice its extra weight through the clutch when pulling away, but it offers amazing traction and stability in snow and ice. Fit winter tyres and you’d have as much loose-surface grip as a Land Rover Freelander.
If you’re doing lots of motorway miles, though, the diesel version is the best bet. While the petrol can return around 34mpg, the TDI posts 45mpg and is cheaper to tax. Whatever the engine, though, this is a true all-rounder.
Rival: Ford Mondeo Estate
The keen driver’s choice, the sharp-handling Ford is a fine estate car. It’s not quite as comfortable for passengers or as good at swallowing luggage, but is still a great load carrier.