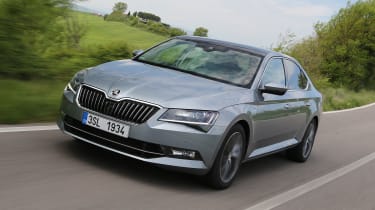 The new Superb is the culmination of everything that Skoda has become so good at. Its huge and airy interior is beautifully screwed together and littered with clever touches to make your life easier, while the exterior is an exercise in sculpted modern minimalism. It’s comfortable, quiet and composed to drive, too, especially with the DSG gearbox. Only the slightly odd ride on adaptive dampers that’s floaty one minute and brittle the next, plus the excessive spec on our test car prevents it getting the full five stars, but in the right spec this could be all the car you’ll ever need.

As the flagship of the Skoda range, the Superb has always been about offering more space, refinement and comfort than its rivals at a price that the average person can afford. Essentially a Mercedes S-Class for the masses, its reputation is forged on limo-like rear legroom and a vast boot, and this third-generation model hasn’t lost sight of that. Now based on a stretched version of the VW Group’s MQB architecture, it weighs up to 75kg less than its predecessor but has grown in virtually every direction. It’s now 28mm longer, 47mm wider and 6mm taller, with a 80mm longer wheelbase, too. So while the rear legroom is identical (frankly, any more would have been overkill) there’s more elbow room (39mm more in the front, 69mm rear) and more headroom (3mm front, 25mm rear) than before.

At 625-litres, the boot on this hatchback version has grown by 30-litres, and expands to a massive 1,760-litres when you flop the split rear bench down via a pair of handles in the boot. That’s a considerable 323-litres more than the Ford Mondeo hatch, plus an estate version, costing around £1,200 more, will follow in mid-2016 and be bigger still. 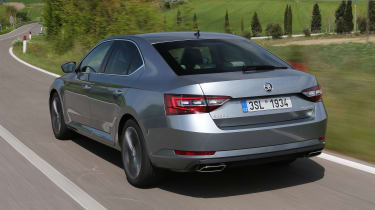 Gone is the overly complicated ‘twindoor’ system (it ruined the styling and customers rarely made use of it, says Skoda), replaced by a single-piece hatch that can be opened electrically and, as an option, by waving your foot under the bumper. It reveals an enormously deep, wide and long loading space, so much so that with the rear seats down you could easily chuck several bikes in there without removing the front wheels. For better access to the boot with the rear seats in place, the parcel shelf can slide down the back of the rear bench and out of the way, while a 12V socket and a removable LED torch mean you’ll be equipped for any eventuality. There are seven all-turbocharged, all four-cylinder engines to pick from, along with the choice of manual and DSG gearboxes, plus front and four-wheel drive. Petrol options range from a 123bhp 1.4 TSI up to a range-topping 276bhp 2.0 TFSI, only available with four-wheel drive and a DSG ‘box. A 118bhp 1.6 TDI kicks off the diesel choices, with a 187bhp 2.0 TDI at the other end. A 1.6 TDI Greenline model with emissions of 95g/km won’t be introduced until mid-2016, so we tried the predicted best-seller – a 148bhp 2.0 TDI with claimed economy and CO2 emissions of 62.8mpg and 118g/km when equipped with the £1,400 DSG auto gearbox.   That equates to no road tax in the first year and £30 thereafter but with 70 per cent of Superb sales expected to be fleet, what really matters is the BIK rate of 21 per cent. Stick with the standard six-speed manual model, which returns 68.9mpg and 108g/km (identical figures to the equivalent Ford Mondeo) and BIK falls to 19 per cent for the top-spec Laurin & Klement model we drove. 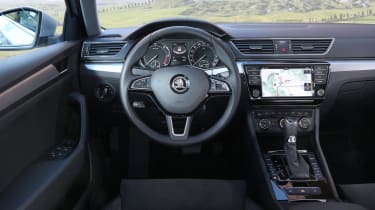 The 2.0 TDI is a familiar engine now, but one that never fails to impress. Even under full throttle it buzzes, rather than clatters away under the bonnet and delivers just the right amount of torque for the Superb to excel at wafting around at low speeds in a high gear, or sitting comfortably in a fast glide along the motorway. If you’re in a hurry, then the excellent DSG gearbox is quite happy to ping through the ratios using the wheel-mounted paddles, before settling back into a smooth, long-legged cruise. In either of those situations, progress is noticeably more serene than its predecessor, so it always feels like a first-class way to travel. All Laurin & Klement models, like our test car, are fitted with adaptive dampers and 18-inch alloys as standard, but despite the big rims it mostly felt soft and supple over the Italian B-roads and Autostrada we encountered. The dampers are firmed up by scrolling through the Comfort, Normal and Sport driving modes (which also tweak the gearbox, steering and throttle response), and the difference between each of the three settings is stark. In Comfort there’s an old Citroen-like quality to the way it floats over dips and crests and bobs around on its springs in a straight line, but the resulting body roll means corners are best taken slowly. Normal tightens up the body control and is the mode best suited to everyday road conditions, while Sport keeps things much flatter and means you can have some genuine fun stringing together a few fast corners and making the most of the lateral grip. When the surface breaks up though, Sport is a bit too brittle and sends jolts and bangs though the bottom of your seat. 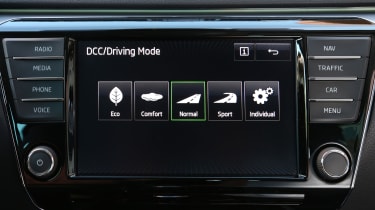 With the previous-generation Superb you were prepared to put up with the awkward exterior design given the tardis-like interior, but now there’s no compromise to make. Using the VisionC concept car as its inspiration, the new Superb carried is 4.86m-long bulk remarkably well. OK, so it won’t stop traffic with its beauty, but the finely chiselled body panels and neat geometric shapes in the grille, headlights and tail lights give it a well-proportioned, thoroughly contemporary look. The interior is much the same, favouring straight lines and simple shapes over anything too curvaceous and controversial and it works well. Clearly, it can’t match an Audi or BMW for luxury, but soft leather seats and solid feeling switchgear and plastics mean it feels far from cheap either.

Some real thought has gone into how owners are likely to interact with the car, too, with a number of ingenious little features. There’s now two built-in umbrellas – one in each of the front doors – and a rechargeable torch that doubles as a boot light. A cupholder with a super-grippy base means that the driver can unscrew a bottle top with one hand (we tried it, it works) and for those with low garage ceilings, the powered rear hatch can be programmed to stop at a certain height. 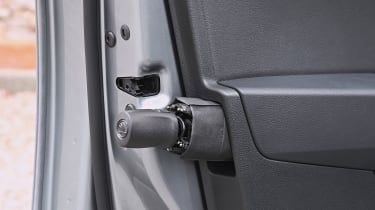 All trim levels are crammed with equipment, so even entry-level S models (starting from £18,640 for the 1.4 TSI, £50 less than the old entry-level model) come with 16-inch alloys, Bluetooth, DAB radio and a five-inch touchscreen. SE models add 17-inch wheels, dual-zone air-con, rear parking sensors and adaptive cruise control, while SE Business (aimed at company car buyers, but is the one we’d recommend private buyers to go for, too) adds 6.5-inch sat-nav, Alcantara upholstery and drive mode select on top of that. Moving up to SE L Executive trim really piles on the luxuries, including 18-inch wheels, powered tailgate, leather seats and the top-spec 8-inch ‘Columbus’ touchscreen sat-nav. And for those who want everything, Laurin & Klement models add, among other things, a 10-speaker stereo, heated front and rear seats, adaptive dampers and a TV tuner to that.

Now see how the mk2 Skoda Superb did in our 2015 Driver Power customer satisfaction survey...