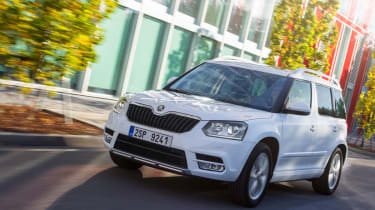 Fitting the 1.2 TSI engine to a fairly big car might seem ambitious, but it’s always been a sweet spot in the Skoda Yeti line-up thanks to its surprising power and light weight, which helps give a sharp drive. The facelift has helped update the looks, too, although prices have crept up. That said, you do get a accomplished all-round family car for your money.

In the crowded world of crossovers, the new Skoda Yeti is a real halfway house. The powerful 4x4 models are priced to match bigger rivals like the Mazda CX-5 and Ford Kuga and are seriously capable off-road, yet prices for this 1.2 TSI start at just £16,600 – which puts it in the same territory as the smaller Nissan Juke.

The 1.2 petrol might be the entry point in the Skoda Yeti range but things have improved for the facelift. The Spartan ‘E’ trim has been dropped from the range, which means even the most basic model comes with 16-inch alloys, a classy three-spoke leather-wrapped steering wheel from the Octavia and electric windows all-round – although the price has risen by £750.

Fortunately this small turbo engine is one of the best in the entire line-up. Available in either standard ‘Yeti’ or the rugged ‘Outdoor’ trim (with no difference in price) it is easily the most refined engine Skoda fits to any of its models. Hushed at idle, it makes a sporty but quiet thrum when accelerating, and is a lot less intrusive than the TDI diesels.

The six-speed manual is precise and easy to use, but the seven-speed DSG auto is even more hassle free – particularly around town. Picking it does mean a slight fall in economy and performance, plus an increase in price, but the DSG Yeti is one of the smoothest automatic crossovers around, and streets ahead of CVT-equipped cars like the Suzuki SX-4.

A lighter kerbweight, and lack of weight in the nose thanks to the tiny engine, helps this particular model feel agile and keen to turn in. It builds on the Yeti’s impressive dynamic setup for what is quite a tall and high-riding car. The ride is a tad firm and wind and road noise isn’t totally isolated from the cabin but there is plenty of grip and the steering and brakes are responsive.

The Yeti has always stood out, even in the crowded crossover segment, and this model’s tiny turbo engine gives it the breadth of ability to take on all comers.