Smart's iconic ForTwo city car gets a revamp inside and out. Can the improvements keep it at the front of the pack? 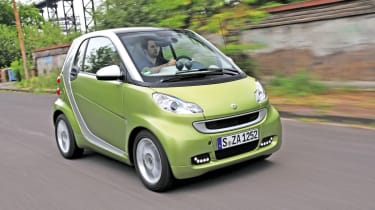 Improved economy, lower emissions and a more stylish appearance are all big steps forward for the ForTwo, while the limited-edition Lightshine broadens the city car’s appeal further. Sadly, though, the company has failed to improve the irritating driving dynamics – the least it could do is tweak the hesitant semi-auto gearbox.

The Smart ForTwo has also been given a green makeover – and it goes far beyond the paintwork. The second-generation city car has been on sale since 2006, and this facelift brings a host of exterior and interior modifications, as well as an improved engine line-up. Can it outwit the competition?

There’s now a wider range of colours, including the matt light-green finish of our car. Plus, the newcomer comes with 15-inch alloy wheels as standard. LED daytime running lights feature on the options list. Inside, the revised interior has a fabric-covered dashboard, the dials have been revamped and standard kit in the entry-level Pulse includes built-in sat-nav, Bluetooth and USB/iPod connectivity.

Smart expects the higher-spec Passion to be the best-selling trim, and the limited-edition Lightshine coupé we drove is based on this – but adds even more equipment as standard. Extras include a panoramic sunroof, plush velour floor mats and a touchscreen display with CD/DVD/SD compatibility.

The tiny three-cylinder 800cc cdi diesel has been tweaked for even stronger efficiency. CO2 emissions have tumbled to 86g/km and it claims 86mpg combined – which is the best economy figure of any car on sale today. Performance from the tiny engine is reasonable, too, with 130Nm of torque and 54bhp on tap. The enthusiastic unit is ideal for the stop-start nature of inner-city traffic.

But the ForTwo can’t match larger rivals such as the Toyota iQ for practicality, and it’s not as poised on the road, especially through corners. The ride is firm in town, too, and the Smart still suffers from the irritating pause every time the five-speed semi-auto box selects a new ratio.

Three standard trim levels go on sale in September, with the special edition following a month later. UK prices have yet to be confirmed, but the entry-level variant is expected to cost around £10,000, with our car creeping closer to the £12,000 mark and the range-topping Brabus at £14,000.

Rival: Toyota iQ What the iQ loses to the Smart in cleanliness and efficiency, it makes up for in practicality and driver appeal. It offers lots of rear space and a punchy engine.