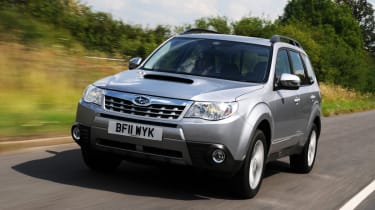 Now in its third generation, the Subaru Forester is a compact SUV that’s built a strong reputation for its robust underpinnings, capable on-road driving dynamics and surprising ability in the rough stuff. Buyers get a choice of two 2.0-litre flat four engines – a 145bhp diesel and 148bhp petrol – that are mated to either a six-speed manual or four-speed auto gearbox. There’s also the option of a five-speed manual with low range transfer box, which gives the Forester greater off-road ability than rivals such as the Honda CR-V and Toyota RAV4.

There are two engines available in the Forester. The 148bhp petrol is a smooth and eager unit, but struggles for outright pace and isn’t particularly fuel efficient. The novel flat-four 2.0-litre diesel is the best bet. It’s not as quick as rivals VW Tiguan 2.0 TDI or Kia Sportage 2.0 CRDi, but the Subaru is more refined and packs decent mid-range muscle. The tall Forester provides the driver with a grandstand view of the road, while all the controls – except the notchy manual gearshift – are light and direct. Impreza underpinnings give the Forester remarkable poise on the road, while the permanent four-wheel-drive adds confidence-inspiring traction. Petrol-powered cars get a five-speed manual gearbox with a low range transfer box for serious mud-plugging ability.

The Forester is hardly eco-friendly. The worst offender is the petrol, which fails to crack 40mpg and emits 173g/km of CO2, meaning a hefty road tax bill. The diesel isn’t much better, falling short of rivals such as the BlueMotion Technology equipped VW Tiguan. Subaru claims a 44.8mpg return at the pumps, while 167g/km emissions put it in the same VED tax band as its petrol powered brother. The well-equipped entry-level versions represent decent value for money, but the range topping XS Nav Plus diesel carries a hefty price tag, favouring the Land Rover Freelander. Further financial damage is inflicted by the poor residuals, with all versions struggling to retain 40 per cent of their value after three years.

The utilitarian lines of the Subaru Forester suit its rough and tumble character. A high-riding stance, bulbous wheel arches and tough looking mouldings give it a more rugged look than rivals such as the Nissan X-Trail and Ford Kuga. There are four trim levels – X, XC, XS and XS Nav Plus. All are well-equipped, with alloy wheels, climate control and ambient cabin lighting at night. Go for the range-topping XS versions and you’ll get a generous kit list, including Bluetooth, xenon headlamps and reversing camera. Nav Plus adds sat-nav, although the system is clunky and outdated. Though the cabin is logically laid out, the design is dated and the materials a little cheap.

There are few complaints about the Forester’s abilities as a practical family holdall. A spacious cabin means you can easily accommodate five adults, while occupants in the back will find more head and legroom than in a VW Tiguan or Toyota RAV4. Swinging open the tailgate reveals a useful 450-litre boot, while folding the rear seats flat increases capacity to 1,660 litres. There's also plenty of useful cubbies and storage spaces around the cabin. However, unlike some rivals, the Subaru doesn’t get a flexibility-boosting sliding rear bench, and its retracting load cover feels a little flimsy. However, the combination of four-wheel drive and self-levelling rear suspension makes the Forester a top choice for towing.

The Forester hasn’t been subjected to a Euro NCAP crash test, but that's no reason to doubt its safety credentials. All models get six airbags, electronic stability control and side impact beams in the doors. Subaru’s symmetrical four-wheel-drive system adds further peace of mind in wet and slippery conditions. Unlike the five-year warranty offered on the Subaru Legacy and Outback, the Forester has to make do with a standard three-year, 60,000 miles guarantee. Still, the brand has a strong reputation for reliability thanks to its robust mechanicals. And while the quality of the cabin materials aren’t up to scratch, the Forester does feel very solidly constructed.