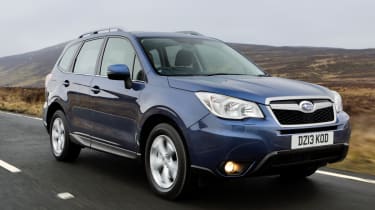 The new Forester offers lots of space and equipment with a solidly built and functional interior, and updates the design just enough to make it look like a new car. However, while it responds to the needs of the firm’s current customer base, its anonymous looks, boxer diesel engine and permanent four-wheel drive still make it a niche choice. Buyers who are new to the brand will struggle to see the appeal, especially with so much competition already on the market.

Times have been tough for Subaru in the UK. The strength of the Japanese yen and a line-up of relatively thirsty cars have caused the withdrawal of the Impreza and WRX STI models from the market, and the Legacy is set to become exactly that.

But the firm is now looking to its strengths – rugged, dependable four-wheel-drive cars for rural areas – in a bid to turn things around. Key to this is the new Forester, driven here in 2.0-litre diesel form, which Subaru reckons will account for half of new Forester sales.

Subaru is a brand that likes to do things its own way, and that’s clear as soon as you wake the unusual 2.0-litre boxer diesel engine under the bonnet. It’s carried over from the old car, albeit with a five per cent improvement in fuel economy with a claimed figure of almost 50mpg.

It remains a rattly engine, chattering away at idle, and only really settling down on light throttle loads at the motorway limit. Any acceleration provokes more noise from the engine, but it also encourages brisk acceleration thanks to its 350Nm of torque that thumps in just below 2,000rpm.

The relatively slow 0-62mph time is a tad unfair, such is the impressive in-gear acceleration that allows you move between bends on a winding road with a simple flex of the throttle pedal.

The boost is enough to provoke a twitch of torque steer through the wheel under hard acceleration, but grip levels remain fierce thanks to the full-time four-wheel-drive system that’s standard across the line-up.

Drop below 2,000rpm and the engine’s power dies away quickly, so it’s worth making sure you keep on top of the diesel’s need for revs with the knuckly shift of the six-speed gearbox.

The brakes are good, but struggle a little more than the engine to keep the Forester’s 1,540kg weight – plus passengers and luggage – in check.

The steering is a bit disappointing, as it’s overly light and doesn’t really give you any idea what the front wheels are doing. However, once you trust the very high levels of grip, the Forester’s handling feels surefooted and safe. The ride is a little on the firm side, and tends to send small bumps and thumps through the car, which can become tiresome on longer drives.

There is a commanding new driving position, though. It’s higher than the previous car, giving you a view right down to the leading edge of the bonnet, and enhanced by the fact that the A-pillars are now 200mm further forward.

This, and shifting the mirrors to the doors, has freed up space to add quarterlight windows, giving very good visibility. The view out of the rear is good, too, helped by a decent range of seat adjustment, although a little more room to tweak the position of the steering wheel would be appreciated.

The Forester is a little bigger than before, which has helped interior space grow. There’s lots of room for heads, shoulders, knees and even toes in the rear, as the car’s floor has been lowered to allow someone with size 14 feet to fit their shoes under the front seats.

The boot is a good, squared-off size and the loading lip has been flattened out, making it easy to load luggage or even dogs – during its research, Subaru found that lots of Forester owners have a pet pooch.

Add in the fact that the interior is made from solid, if not exciting materials, and the new Forester sticks to Subaru’s previous tried-and-tested recipe for success. Time will tell if it’s enough to keep the brand afloat in the UK.