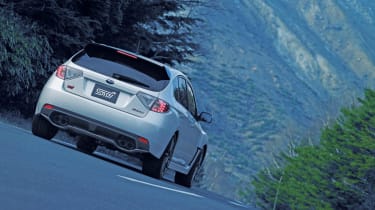 A Japan market special, the Subaru Impreza R205 is possibly the best hatchback WRX STi to date. It certainly looks the part, and the unique 2.0-litre turbo engine and chassis set-up make it an excellent, hard-edged driver’s car. The fruity rasp of that lowered back pressure exhaust is incredible. For those who feel the latest Impreza WRX STi still lacks the edge of earlier generations, the R205 puts that to rights with its speed, ability and all-round response.

When it comes to the Impreza WRX STi, Subaru has never been one to rest on its laurels. It’s not by accident that this four-wheel-drive, turbocharged supercar is one of the world’s most revered performance models.

Entertaining variations on the STi seem to come thick and fast, and this is the latest one out in Japan – the Impreza R205. We’ve driven it on home soil, so how does it shape up?

On the face of it, the R205 doesn’t appear a lot different to the Impreza 2.5 STi models already on sale in the UK. But look again. The engine, Subaru’s powerful flat four-cylinder 2.0-litre, gets a high-performance turbo, and is completely different to the version offered in Britain. The same goes for the R205’s special sports exhaust and unique STi suspension and brake set-up (both fine-tuned at Germany’s Nürburgring).

Also included as part of the package are exclusive 18-inch alloys, a fresh rear spoiler and new front grille – although, at a glance, only STi diehards are likely to be any the wiser.

All the same, the R205 (the R is for Road Sport) is a storming car to drive. Central to its appeal is the Japan-only 2.0-litre boxer powerplant. Hard edged and high revving (the red line is 8,000rpm), it packs explosive power, especially once up and moving past the 3,500rpm mark.

As the revs climb, the engine’s surge is searing and relentless, and the blaring exhaust note is equally enthralling.

Subaru quotes 316bhp at 6,400rpm for the R205, coupled with a hefty torque output of 431Nm at 4,000rpm. On paper, the UK’s Impreza 2.5 STi 330S can beat that, but the newcomer is more exhilarating at the top end, as befits an engine originally designed for competition. The feel and precision of the car’s close-ratio six-speed manual box is another joy, while the R205’s agile handling is astounding.

Its dedicated suspension and shell are ultra stiff, while the steering is fabulously quick and direct. Grip is immense, too.

You can, if you wish, alter the centre differential settings to send more of the 4WD torque split to the rear. But on the road, only highly experienced drivers are likely to bother. Even in the standard setting, the R205 has terrific poise and alertness. Just don’t imagine you’re getting the all-round polish and refinement of a Volkswagen Golf R, for example. The Subaru has a meatier, more down-to-earth feel.

In traffic, the R205 is still easy to drive, making it decent for everyday use. Naturally, the ride is stiff, but it’s never harsh. The powerful Brembo brakes need a firm push, though.

Exclusivity is guaranteed, too, with only 400 R205s planned. How does it rate overall? Pretty near the top for looks, speed and sheer driver involvement– just as Subaru intended.

In Japan, the R205 costs £32,680 at current rates, and if you find one privately imported to the UK and snap it up, you’ll have arguably the ultimate factory Impreza WRX STi.