Famous name returns on fastest Impreza ever to hit the UK 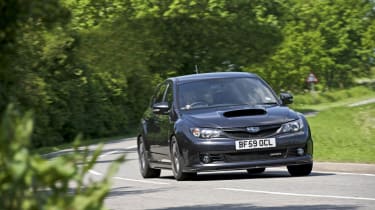 First things first. £50,000 (a huge £23,000 increase over the standard STi) is too much money for this car. Yes, it’s very fast, it’s great to see the Cosworth name back and the firm has clearly worked hard to improve the engine and suspension. But the end result is only partially successful, with drawbacks that include short gearing and light steering. As a result the Impreza CS400 isn’t the most rounded performer at the moment – but it bodes well for the production-ready article.

Cosworth is back! More than thirteen years since it graced the Escort RS Cosworth, the famous badge returns – but not on the rump of a Ford this time. In a new partnership, Cosworth has teamed up with Subaru to create the fastest, most fearsome Impreza ever seen in the UK.

Based on the standard WRX STi and officially known as the CS400, the newcomer, of which only 75 will be built, has been highly tuned by the Northampton firm. The 2.5-litre flat four gains new pistons, conrods, bearings, head gasket, oil pump and a much larger turbo while there are fresh springs and dampers, a 15mm lower ride height at the front, a wider rear track and new brakes.

Cosworth’s aim is to create the ultimate road-going Impreza – not a track day machine. So although the revisions make it sharper to drive, comfort and refinement are still important.

This is clear inside – the stripped-out approach of many track specials is shunned. Instead there’s glossy piano black trim, seats with bigger bolsters and high equipment levels. The trouble is the changes fail to disguise a cabin that falls short in terms of design and quality. The exterior tweaks are more subtle, confined mainly to new 18-inch alloys, Cosworth badging and matt paint.

But if it doesn’t look like a £50,000 car does it drive like one? We tested a pre-production prototype to find out. And initial impressions are good. The flat four fires up with a characterful burble and the gearshift is tight and mechanical. The ride is firm around town, but at higher speeds it’s composed, giving exceptional body control. Confidence is dented by steering that doesn’t have enough feel and is too loose around the straightahead, but once into a corner the power and four-wheel drive grip allow you to carry plenty of speed through.

Provided the engine is on boost. Getting this much power from the flat four can’t have been easy, even for a firm that builds F1 engines for Williams and Lotus. The downsides are little torque below 3,500rpm and considerable turbo lag. Drive round these problems and the CS400 comes alive, a savage metallic hiss accompanying fearsome acceleration. If you love the way the standard WRX drives, this one will blow you away – just don’t forget there are other ways to spend £50,000.