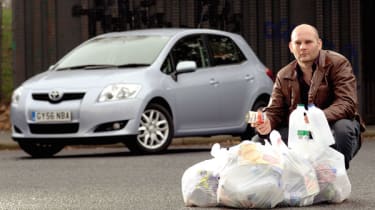 Our new Auris has only recently arrived on the Auto Express fleet, but I already have an uncanny feeling of déjà vu. Having looked after a Toyota Corolla Verso for a year, I can see much of that model in this hatchback - but not in a good way. When I look at how Honda reinvented the Civic, I can't help wondering why Toyota didn't start from scratch and take the opportunity to change people's perceptions of the Corolla badge.

Come to think of it, I also wish the engineers had spent a bit more time working on the sound insulation. Our Auris features the 2.0-litre D-4D diesel engine - and it's certainly neither quiet nor refined, especially when started up first thing in the morning.

I've been driving a Kia Sportage 2.0 CRDi for the last 12 months, and the Japanese hatchback is much louder than the Korean SUV, although the Auris does improve a little as the engine warms up.

Otherwise, it makes easy work of my daily drive through London. The steering is light and accurate, and the Toyota feels stable and nippy. One thing I am missing, though, is the practicality and versatility of both the Sportage and the Corolla Verso. Even when compared with other hatchbacks, the Auris seems small - rear space is cramped and the boot modest.

I also have trouble with the new cabin design. I'm six feet tall, and my leg bangs against the raised centre console, which is irritating. That's not the only ergonomic flaw I've found, either. The storage cubby underneath the seat is totally inaccessible, the electric window switches aren't illuminated in the dark, so it's trial and error after the sun goes down, and the handbrake is awkward to use.

So while I loved the Corolla Verso, I haven't formed such an immediate bond with the Auris. The early signs are that Toyota's recycling scheme hasn't paid off.