The all-new petrol-engined Toyota Auris is smooth and efficient, but where's the sparkle? 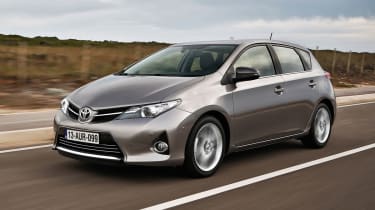 The 1.6-litre Auris is quieter, smoother and more efficient than before. It’s better to look at, too, easier to drive and with a more sophisticated interior. But it still trails rivals for economy and boot space, despite an increase in length. The main problem, though, is the lack of sparkle behind the wheel. The fuel-sipping hybrid makes more sense.

We drove the 87g/km Toyota Auris Hybrid a few weeks ago and were more impressed with its fuel efficiency than the way it drove. So can the 1.6-litre petrol model, expected to be the best-seller in the UK, do any better?

The four-cylinder engine produces 130bhp, with 160Nm of torque, and comes with a choice of six-speed manual or CVT gearboxes. We tested the manual in the hope it would add some excitement to the rather forgettable driving experience.

Although you’ll come across quite a few acronyms with this engine, the one that matters is VVT-i, which refers to the variable valve timing that’s designed to make it more efficient. Combined with a weight reduction of 45kg over the old 1.6 Auris, it works; this car achieves 47.9mpg and emits 138g/km of CO2.

The petrol engine is smooth and unobtrusively quiet at any speed. This, plus the greatly improved driving position and quicker steering ratio, make the Auris marginally more enjoyable to drive than its predecessor.

The lightweight feel to the pedals and gearshift makes it easy to drive smoothly in town, but on the motorway you’ll have to change down a gear or two to tackle hills, where the relative lack of torque means it struggles.

Both the 1.6 and the Hybrid have a sophisticated multi-link rear suspension set-up (other models have a simpler, less comfortable torsion-beam rear axle). Despite this, the ride is still a bit jiggly on poor surfaces.

Toyota has clearly made an effort to raise interior quality, but some of the hard surfaces still aren’t up to scratch. The boot is 360 litres, 20 less than the Golf, and the rear seats feel slightly cramped compared to some rivals.