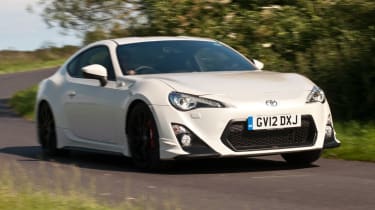 We love the Toyota GT 86 – and the prospect of an even more sporty version is a tantalising one. The range of TRD parts is well chosen and really adds to the appeal of this back-to-basics rear-wheel-drive coupe. However, we’d urge Toyota to try to keep a lid on the cost of these extras – specify the whole lot and you could be faced with a big bill for mostly cosmetic changes.

It’s one of our favourite sports cars of 2012 so far, but even we think Toyota’s GT 86 could do with some extra spice. And that’s just what this version brings.

The GT 86 TRD is the work of the Toyota Racing Development performance division, and gets a whole host of upgrades designed to ratchet up the excitement.

They also increase the price. Add all the performance parts this car has and you’d be looking at a bill of around £40,000. Given that the standard model carries a £24,995 price tag, is the TRD worth the huge £15,000 extra?

Well, you certainly get head-turning looks. TRD has developed its own aggressive bodykit, which comprises a lower front spoiler, side skirts, a redesigned rear spoiler and rear diffuser along with racy new 18-inch alloy wheels, painted black. These are wrapped in 225/40-section tyres, which are larger and wider than the standard model’s 215/45-section R17s.

The braking modifications will also excite driving enthusiasts, as they include huge six-piston front and four-piston rear calipers, all in a dramatic shade of red, while the suspension is upgraded with four-way adjustable dampers.

Inside are new sports seats and a raft of TRD badges for the push-button starter and gearlever. The one area that’s left relatively untouched is the engine, as the only additions to boost our test car’s performance were a new exhaust system – just check out those dramatic quad pipes at the rear – and a TRD air filter.

Toyota couldn’t confirm whether these tweaks boosted power by much, although such a set-up usually adds about 10bhp, which would take power from 197bhp to around 207bhp.

With the added weight of the new bodykit and larger wheels, we’d expect any improvement in straight-line speed to be negated anyway, leaving the 0-62mph time at around 7.6 seconds.

On the move, the GT 86 TRD doesn’t have the low-rev punch of a turbocharged hot hatch like the new 247bhp Ford Focus ST; instead it thrives on revs. The slick six-speed manual gearbox makes it easy to keep the engine on the boil, though, while the new exhaust system adds a sportier note.

Our brief test took place at the Goodwood Festival of Speed and we could feel the suspension changes on our run up the famous hill. We could carry lots of speed through the tight, tricky corners and the GT 86 was even more agile than the standard car.

Is all this worth £40,000, though? You’d have to be a dedicated enthusiast to think so, particularly when you could have a Porsche Boxster for about £36,500. In fairness, Toyota is still deciding on how to offer the TRD package to customers, and it looks likely that buyers will be able to pick and choose from a wide range of parts. So you could just add the wheels (£850 each at the moment!), or the upgraded brakes or a boot spoiler. Or dig deep and have the whole lot.

We think Toyota needs to give the GT 86 far more performance to justify a large increase to the price tag, although it’s possible more engine tuning could be available by the time the TRD parts hit dealers in January.

Whatever happens, having a great range of tuning options certainly boosts the appeal of one of our favourite coupes.