Toyota's giant Land Cruiser offroader gets another round of nips and tucks. Are the changes enough to keep pace with rivals? 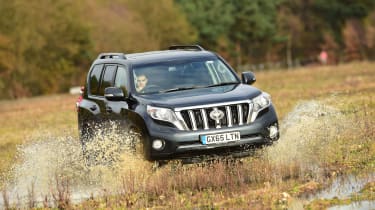 Lifelong Land Cruiser fans will welcome these tweaks, but for most buyers it remains a compromised choice. While it’s great off-road, the car’s unrefined on tarmac. Throw in a dated cabin and challenging styling, and most will opt for a Discovery.

Ever since the old Land Cruiser V8 was axed back in August, the standard Toyota Land Cruiser with its four-cylinder diesel has carried Toyota’s big 4x4 flag. And to ensure the model is fighting fit, the company has fitted a new engine and improved the specification.

Toyota has ditched the previous car’s 3.0-litre diesel in favour of a smaller 2.8-litre. As a result, CO2 emissions have dropped from an alarming 214g/km to a still hefty 194g/km (cutting the annual road tax bill by £25), while official fuel economy rises from 34.9 to 38.2mpg. 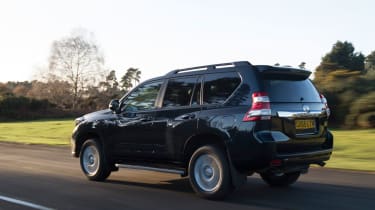 The bad news is that the 200cc drop in capacity and 11bhp cut in power have also extended the 0-62mph time by 1.7 seconds (to 12.7 seconds). While some would say that’s not important for a car like this, the performance shortfall makes itself felt in day-to-day driving and when overtaking. The engine’s quieter and more refined than the old 3.0, though, which helps compensate.What hasn’t changed is the ride. It’s bouncy even on the smoothest roads, and the steering offers virtually no feel.

The interior isn’t a strong point, either. All models get new equipment, and our top-spec Invincible features full leather trim, blind spot monitoring, Blu-ray rearseat entertainment and the Toyota Touch 2 infotainment system with navigation. But the interior is a mismatch of dated switchgear, tacky-looking wood and dark plastics. And at £54,895, the car doesn’t come cheap. 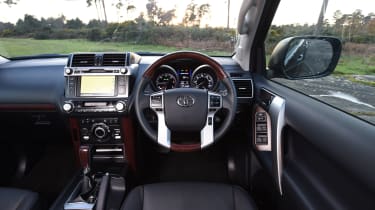 Nevertheless, it’s a match for the Land Rover Discovery over challenging terrain, with ride height control, a crawl mode, limited-slip differential and downhill assist as standard. And for a certain group of buyers, nothing comes close to the Land Cruiser’s emphasis on putting off-road ability above on-road performance and luxury. The trouble is, for the vast majority of customers, on-road style and refinement are more important.