Put off by eco-friendly models? Toyota's Prius Amberjac aims to prove you wrong. We find out the hows and whys 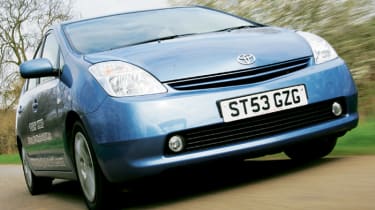 As we previously repor-ted (Issue 904), the next-generation Prius will get a massive fuel economy boost. That's because it will feature batteries such as those powering this aftermarket conversion of Toyota's current car. Amberjac's price is pretty high, but if eco-credentials are important to you, it's got to be worth every penny.

Are you one of those people who doesn't take eco-friendly models seriously? Our Inside Story survey reveals that most British buyers still wouldn't spend their money on a hybrid - and one of the main reasons is that economy isn't good enough. Well, here's a car that aims to prove everyone wrong.

It's a modified Toyota Prius with bold claims of a real-world 130mpg, half the CO2 emissions of the standard vehicle and a 'home plug-in' feature to boost the battery capability. In fact, you could argue it's the Prius the Japanese firm should have built in the first place.

Even more amazingly, it's standard in every respect but for one - the battery. Amberjac Projects, based in Grantham, Lincs, has replaced the factory electric power unit under the boot floor with the latest lithium ion phosphate technology shared with modern mobile phones. The only visible change is a socket in the rear bumper. But could the revamped Prius really deliver that incredible economy? We were first behind the wheel to find out.

In the standard model, if you stick below 31mph, you run in silent electric mode. But you don't travel much more than a mile or two before the battery power is low, and the engine fires up to recharge it. With Amberjac's modifications, you get 30 miles. It means you could commute 15 miles each way in a city and have no fuel costs at all, bar the overnight charge. At Powergen's current price, that's only 21.9p.

On our varied test route, Amberjac boss Simon Sheldon estimated we were returning 110mpg. He said: "It will do 130mpg in the right conditions, and we've even seen 180mpg." And it's all because of the battery and overnight charge; dynamically, the car is otherwise standard. Toyota didn't build the Prius this way as the battery technology wasn't proven when it launched the car two years ago. However, the innovation isn't cheap - cost was another deterrent to the drivers who took part in our survey, and this vehicle doesn't address it. Con-version takes only three hours, but adds an eye-watering £9,050 to the price!

Still, you'll be saving money from the moment you turn the key. This car is zero rated for road tax as CO2 emissions are only 60g/km, compared with an already impressive 104g/km for Toyota's version.

The model will be available from mid-September, but orders and deposits are being taken from June. Amberjac plans to carry out 50-100 conversions in the first 12 months, while working on a second, cheaper machine.