The latest evolution of Toyota's enduringly popular Prius is set to offer unrivalled efficiency, and put Toyota back at the forefront of low-emissions technology. 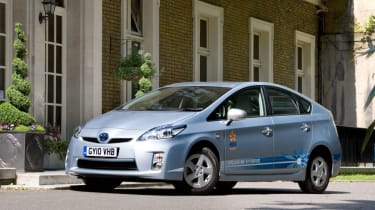 This Plug-in version of the Prius gives a positive snap-shot of the future of Toyota’s low-carbon cars, its unrivalled efficiency combined with increased practicality will appeal to a much broader range of buyers than more expensive electric cars that don’t have a conventional engine to fall back on. We only hope it keeps these admirable characteristics – and a competitive price tag - when it arrives in two years time.

This is a Prius like no other – a plug-in electric Hybrid which Toyota claims will do an astonishing 108.6mpg and emit just 59g/km of C02.

The biggest difference between this car and the regular third-generation Prius is in it’s electric power source. The Plug-in version uses Lithium-ion batteries for the first time in a Toyota. They can carry more energy and recharge faster (a full charge now takes just 90 minutes) than the smaller nickel-metal hydride units fitted to the current Auris and Prius hybrids.

Although they add an extra 130kg to the kerbweight, the new batteries increase the all-electric range from two miles to a much more useful 12.5, while the top-speed in EV mode is now 62mph. That means that during most town driving, the 1.8-litre petrol engine remains firmly off, only stirring into life if the throttle is pushed right to the floor.

During our test the engine only cut in once, and the transition between the two power deliveries is completely seamless. The Prius is eerily quiet, but still performs reasonably well - the electric motor providing enough power and torque to easily keep up with traffic.

The rest of the car’s mechanicals are carried over from the normal Prius – so it has the same cushioned ride and slightly numb steering, but also feels much more like a production car than an early prototype.

The only drawback is that Lithium-ion batteries are heavy and expensive to produce, so expect the Plug-in to command a significant premium over the standard car when it goes on sale at the start of 2012.

The model we drove is one of 600 taking part in a three-year global trial to assess how advanced electric vehicles like the Prius perform in real-world conditions, and to understand how and when people will want to charge them.

Toyota are expecting to have sold 3,000,000 hybrids by the end of this year, and the Japanese firm’s expertise shows in the build quality. Their gamble is that until there is a major leap in battery technology, Plug-ins like the Prius will be the best compromise between efficiency and usability, while fully electric cars will remain a niche choice.