In the past, there have been some memorable motoring tussles. The early Nineties saw the beginning of the Ford Mondeo's fight with Vauxhall's Vectra. 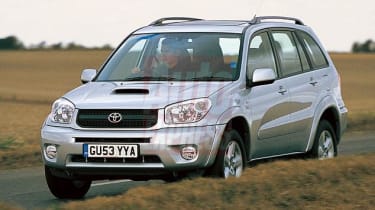 The RAV4 is already near the top of our SUV shopping list - and it's set to climb even higher. Changes to the styling and cabin keep the car looking sharp and should see buyers queuing up. Keen drivers will also welcome the weightier steering, which is sure to help the RAV4 hold its position at the top of the 4x4 sales charts.

In the past, there have been some memorable motoring tussles. The early Nineties saw the beginning of the Ford Mondeo's fight with Vauxhall's Vectra. Then there was the Renault Scenic against Citroen's Xsara Picasso, plus the long-running scrap between the BMW 3-Series and Mercedes C-Class.

These days, one of the most significant scuffles is in the small 4x4 market between the Toyota RAV4 and Nissan X-Trail. A more imaginative interior has made the Nissan our favourite, but can Toyota change our minds with a revised version of its sales chart-topping 4x4?

One of the main selling points for the RAV4 has always been its styling. The chunky shape has won many fans, so only minor updates have been required to keep it looking fresh. At the front, the grille, bumper and headlights all feature a sharper finish, while the tail-lights have also been redesigned. The overall effect isn't radically different, but it's enough to set it apart from the existing car.

Move inside and the changes are equally subtle and effective. Where the X-Trail has always scored points over its rival is with the cabin design - there's nothing wrong with the RAV4's interior, it's just a bit dull. We'd hoped some visual spice would be added with this facelift, and while new materials and alloy rims round the dials are a fine start, the dash is still functional rather than fun.

On the road, it soon becomes clear why the RAV4 is Europe's best-selling SUV. Toyota has focused on enhancing the ride quality, but it's the steering that has been improved most. It's still over-assisted by family car standards, but the extra weight and sharper responses make the RAV4 even better to drive, and help fulfil the 'sporty' off-roader brief.

Our car came with the familiar 2.0-litre D-4D diesel, which is unchanged. And while its 114bhp doesn't sound like much, lots of low-down torque gives a 0-60mph time of 12.1 seconds. Having covered less than 500 miles, our Toyota felt decidedly wheezy, but as Auto Express's long-term RAV4 has proved, performance is much more impressive with a few thousand miles on the clock.

So it's a more convincing package in the metal - but what about on paper? To make your choice simpler, Toyota has replaced the previous four trim levels with three: XT2, XT3 and XT4. Our range-topping XT4 is priced £21,995 - that's £1,295 more than the VX it has replaced. However, standard equipment does include automatic climate control, Vehicle Stability Control, leather seats and a CD player. The entry-level 2.0-litre petrol XT2 weighs in at £15,995.

Against the flagship £23,200 X-Trail, the RAV4 XT4 looks good value. Another significant rival is Land Rover's Freelander, now even more attractive after a recent facelift added Range Rover lights and a more stylish interior. However, the top Td4 five-door is £24,600, making the Freelander the priciest of the three.

The gap between the RAV4 and the X-Trail has been narrowed, and while the Toyota offers everything you'd expect of an SUV, we would have liked some more drastic interior modifications.