Stop-start boosts efficiency, but does this version of green baby make sense? 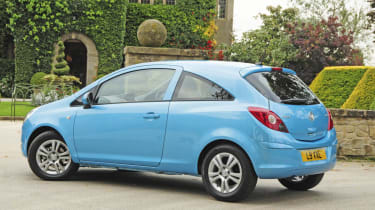 There are quite a few ecoFLEX models in the Corsa range, but only those fitted with the 94bhp turbodiesel engine come in below the 100g/km CO2 emissions barrier, and qualify for free road tax. Considering those variants don’t cost much more, they make much more sense. This 74bhp Corsa ecoFLEX stop-start is still a frugal, practical supermini that drives well – but it’s beginning to show its age.

The Corsa is already the best-selling model in Vauxhall’s ecoFLEX range, but the British firm isn’t sitting on its laurels.

Its low-emissions supermini now gets stop-start, too. The efficiency-boosting technology promises to increase urban fuel economy by 12.5 per cent on the Euro V-compliant 1.3-litre CDTI.

On the road, the 74bhp diesel is gruff and noisy, even at idle, although the stop-start means the lack of refinement ceases to be an issue when in traffic.

The system is seamless, and drivers can customise the car’s settings to automatically disable the air-con while the engine is off, to maximise efficiency. Plus, stop-start can be deactivated by pressing an ‘eco’ button on the centre console. There are a few updates to ensure the set-up is smoothly integrated – Vauxhall has improved the starter motor and fitted a high-performance battery to make restarts smooth. A second water pump keeps the cabin cool while he engine is stopped.

Despite its meagre power output, the diesel unit feels surprisingly punchy, and there’s enough grunt to keep up with city traffic, thanks to reworked gear ratios. But at motorway speeds, the engine begins to struggle.

For this facelifted model, engineers have reworked the steering and suspension, so the Corsa is sharper to drive than the model it replaces. It’s still not as involving as a Ford Fiesta, though. The low-rolling-resistance tyres are short on grip, too,meaning the front wheels tend to lose traction easily under aggressive cornering, resulting in understeer. However, soft suspension means the ride is comfortable and the Corsa soaks up bumps easily.

The interior is as functional as ever. It’s logically laid out and the smart materials give a grown-up feel. There’s also plenty of space in the front and rear.

Models fitted with stop-start cost only £260 more than those without, so it’s a worthwhile investment. Our SE trim variant was £15,710, and came with luxuries such as heated seats and heated steering wheel. Basic S models are £13,695.

Drive with a light right foot, and impressive figures are within reach. Claimed combined fuel consumption is a remarkable 70.6mpg – although we could muster only 56mpg on our mixed route. CO2 emissions are low, at 105g/km, which translates to road tax at only £20 a year.

Yet while the stop-start 74bhp model is a good choice for city drivers, we don’t understand its presence in the line-up. For around £400 more, Vauxhall sells a 94bhp ecoFLEX variant, complete with stop-start as standard – and it’s even more efficient. CO2 emissions of 94g/km ensure owners pay nothing in road tax, and fuel economy of 78.5mpg combined eclipses the Corsa we drove.