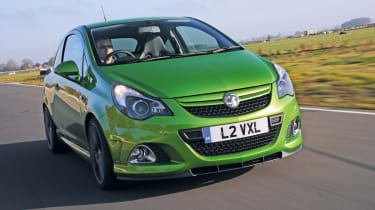 A car with this name has to deliver – and the Corsa does. The suspension changes and limited-slip diff improve the handling, while acceleration is searing. Few hot hatches have as much grip, but it still leaves you feeling detached, while the styling won’t suit all. Plus, the Nurburgring is £3,395 pricier than the standard car. Still, for die-hard performance Vauxhall fans, it’s money well spent.

As the name suggests, Vauxhall’s Corsa VXR Nurburgring Edition promises to deliver plenty of thrills. It’s been developed at the world’s toughest race track, so expectations are high.
We’ve driven the car on UK roads for the first time, and it’s clear the changes over the regular VXR are more than skin deep. Under the bonnet, the 1.6-litre turbocharged four-cylinder engine is uprated to deliver an extra 13bhp, at 202bhp, while torque is up by 36Nm to 250Nm.
You can certainly feel the extra punch. The 0-60mph time drops by three tenths to 6.5 seconds and there’s lots of in-gear urge.
Straight-line pace was never in short supply in the standard car, though; what it always lacked was driver engagement. So do the changes to the chassis finally deliver the kind of hot supermini enthusiasts have always wanted?

In comes a lower ride height, while unique Bilstein springs and dampers reduce roll and help the Corsa to corner with impressive composure. Better still, a limited-slip differential from leading specialist Drexler improves traction and cuts understeer, allowing you to keep a tight line under hard acceleration.
In short, the Nurburgring Edition turns into corners quickly and gains speed at an amazing rate. The level of grip means on dry tarmac it doesn’t trouble its recalibrated traction control a great deal, either.
The Brembo brake discs are 30 per cent lighter than before, while the ABS has been revised as well, so it’s a shame that the pedal feels numb under-foot.
And despite the car’s glued-to-the-road cornering and superb high-speed stability, drivers are left a little detached from the action due to a lack of feel from the steering.
Inside, the well built cabin is marked out by Nurburgring badging on the sills, while the famous German circuit’s logo is embroidered into the heavily bolstered and hugely supportive Recaro sports seats.
As in the standard car, there’s a wide range of adjustment and it’s easy to get comfortable, but thick A-pillars cause blind spots, while the radio and heater controls are located too low on the dash.
Still, the exterior styling has been turned up a notch over the normal VXR, with twin stainless steel exhaust pipes, forged alloy wheels, Nurburgring decals on the B-pillars and a racy bodykit.
There are two unique colours: Henna Red and our test car’s Grasshopper Green. And with only 250 models a year coming here, the Nurburgring Edition is guaranteed hot hatch exclusivity.
Share this on TwitterShare this on FacebookEmail