New version of Vauxhall Corsa is gearing up for launch in late 2014, and we hit the road in a prototype 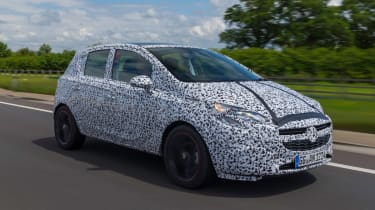 In 2013, a full eight years after its launch, 83,000 Vauxhall Corsa cars were sold in the UK - making it the third best-selling model behind the Ford Focus and Fiesta. Little wonder then that when Vauxhall asked its customers what needed changing the answer was very little.

The basic chassis architecture and the dimensions are carried over unchanged, but Vauxhall claims the way it drives and the way it looks is a world apart. We’ll have to wait until July to see the more up market interior and exterior in full, but we were invited to test drive a final-stage prototype, ahead of it arriving in dealers this November, to assess whether the fifth-generation Corsa has come of age.

Even under camouflage, the Corsa’s new Adam-inspired face and swept back headlights are obvious. The interior was draped in black cloth, but we managed to sneak a peek underneath and saw a much more premium dash, identical in design to the Adam.

A greater range of movement for the driver’s seat and an adjustable steering wheel mean it’s possible to find a lower, sportier driving position in the new car, whereas you always felt perched up a bit high in its predecessor. 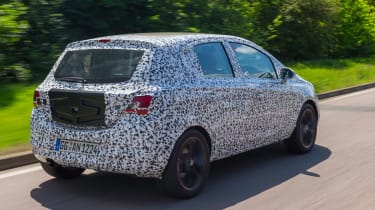 Our test car was fitted with a 99bhp 1.4-litre turbo - one of two new engines. The other is the 1.0-litre three-cylinder turbo, available with either 113bhp or 89bhp, while developments of the existing 1.2 and 1.4-litre naturally aspirated petrols and a 1.3 CDTi are also expected.

Twist the key and it’s still not the quietest engine in the class, but on the move the turbocharger helps to deliver a healthy kick of mid-range torque, where the non-turbocharged unit would be running out of puff. A new six-speed manual gearbox reduces revs at higher speeds and improves refinement on the motorway, but even around town the Corsa feels like a much more grown up proposition.

Completely revised suspension means the Corsa rides bumps with a gentle thump rather a crash, even on the 17-inch alloys and with the lower stiffer sports suspension of our SRi-spec prototype.

The electric power steering has been completely retuned, too, with a more relaxed ratio for the lesser models, and a sharper calibration for sportier SRi versions. According to Vauxhall’s head of advanced vehicle dynamics Michael Harder the focus was to make the car react quicker just off centre, and because of our twisty B-roads, UK cars get unique tuning that’s even sharper than the rest of Europe.

Whereas with the old car there was a slight delay between turning the wheel and feeling a reaction, the front end is now much quicker and more predictable in its responses. The Corsa is still very much a car designed for everyday useability, but based on this early taster it’s now both more comfortable and sharper to drive, and could give the Fiesta a real run for its money in the sales charts.