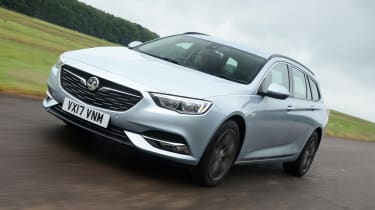 Whether you opt for a petrol or diesel-powered Insignia Sports Tourer comes down to circumstance and personal preference. Both versions are practical, refined and cheap to run, and should offer enough poke to successfully transport heavier loads without issue. Higher mileage drivers are better served by the 1.6-litre Turbo D, but this petrol car will suit town dwellers after a spacious, stylish and well-equipped family estate.

We drove the new Vauxhall Insignia Sports Tourer last month, and came away impressed by its breadth of ability. We praised everything from the spacious cabin to its punchy engine and high-quality interior – but what if you’re after a petrol-powered estate? Can the turbocharged Insignia satisfy those wanting to ditch diesel?

The first thing you notice is how quiet and refined the new car is. We rated the new 1.5 turbo highly in the Grand Sport hatchback, and it’s a suitable fit for the wagon, too. Push the starter button and there’s barely a murmur from under the bonnet, while pulling away from a standstill is an equally relaxed affair. It can feel strained at high revs, but a welcome slug of torque means you’ll rarely find yourself stretching it that far.

In fact, this higher-power 163bhp version feels plenty quick enough on UK roads. It costs just £300 more than the equivalent 138bhp car, yet slashes a full second from the 0-62mph dash. It’ll cost around the same to run, too, given the 139g/km CO2 emissions put it in the same 26 per cent Benefit in Kind tax bracket for company car drivers. That’s only one percentage point higher than the 1.6 diesel, too, though combined economy of 47.1mpg means you’ll spend more on fuel. 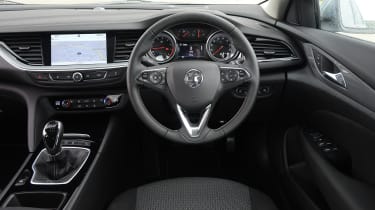 But for those spending a lot of time making short trips around town, the petrol Insignia Sports Tourer makes a lot of sense. The stop-start system works well, preventing the engine from reengaging until you lift off the brake. Other makers restart the engine when you depress the clutch, wasting unnecessary fuel before you’re ready to move off.

We’ve not tried the car with a full load, but its composed low-speed ride is matched by fine motorway manners. The cabin is well insulated from wind and road noise, and the soft suspension soaks up all but the worst lumps and bumps. In fact, if you can live with the less favourable fuel consumption, it’s a fine long-distance cruiser. It’s not the most fun to drive, however, with light steering and a somewhat baggy long-throw gearbox. Body control is good, though.

Of course, it gets the same spacious 560-litre boot, which expands to 1,665 litres with the rear seats folded flat. There’s plenty of room in the back, too, with the clever silver exterior trim giving the illusion of a low roofline, without the interior compromises associated with a swooping shooting brake. Neat touches like the handy luggage nets and easy-to-access seat levers add another level of versatility.

We’ve previously driven a Design Nav car in Grand Sport guise, and an identical spec sheet makes this Sports Tourer estate the best value model in the range. Vauxhall’s clever 17-inch alloy-look wheel trims are indistinguishable from the real deal, while auto lights, keyless entry and air-con are all standard. An eight-inch colour touchscreen is also included, and if you can live without a built-in sat-nav, the entry-level Design spec’s Apple CarPlay and Android Auto setup allows map access through a suitably equipped smartphone.