Exclusive images show VW's Toyota Prius rival, which will sit on new by MEB platform. It could get the VW XL3 name. 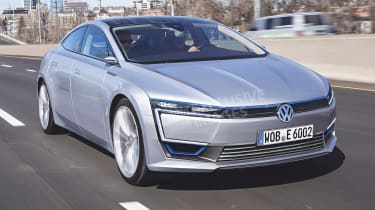 Volkswagen is placing a bespoke rival for the Toyota Prius – revealed in our exclusive images – at the heart of radical plans to increase the amount of electrified vehicles in its line-up by 2020. The car could take the Volkswagen XL3 name.

As it continues to suffer from ongoing criticism over its handling of the Dieselgate scandal, the manufacturer has decided to accelerate its investment in a set of all-electric and hybrid components. As part of this, it will extend its EV line-up to include a new standalone model to sit alongside the likes of the GTE-badged plug-in hybrid Passat and Golf and the all-electric Golf and up! in the range.

Speaking exclusively to Auto Express, VW’s new brand boss Dr Herbert Diess admitted that while the company remains committed to electric cars and hybrids built on its regular MQB chassis – the same underpinnings as the conventional Golf and Passat – he can already see the benefit of switching to a platform designed specifically for electrification.

“If you look further, then it’s probably worthwhile thinking of an entirely new architecture because then you can let go of the technical components you put in the car because of the combustion engine,” said Diess. “You gain a lot of space in the interior, for instance.

“For a full EV, you get one size bigger on the interior for the exterior dimensions, so in the length of a Golf you get the interior of a Passat.” 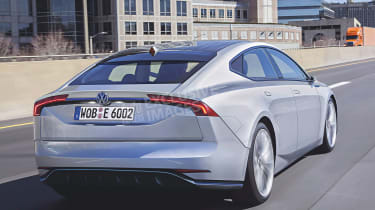 VW’s new electric platform is likely to be called MEB – although it’s expected to be largely compatible with MQB, allowing electric cars to built on the same lines as conventionally powered vehicles.

Sources in Germany suggest the Prius rival could get the XL3 badge. That would give it lineage with VW’s XL1 concept, a gruff but aerodynamic show car that achieved fuel consumption of less than one litre per 100 kilometres, or 283mpg.

The XL3 is likely to mix an electric motor producing around 30bhp with a detuned version of VW’s 1.4-litre turbocharged petrol engine, and feature cylinder deactivation to save even more fuel. It’s expected to have a relatively modest battery and an electric-only range of only a few miles – but overall fuel consumption of more than 94mpg, or three litres per 100 kilometres.

Beyond the hybrid, the company is also working towards a fully electric vehicle. VW Group boss Matthias Müller has given strong indications of the technical targets of the project. “Cars with all-electric ranges of over 500km [around 300 miles] are feasible by the end of the decade,” he said.

“Charging will only take as long as a coffee break. And in the long term, an electric car will cost less than a car with an internal combustion engine.”

What do you think of our exclusive images of Volkswagen's XL3 Prius rival? Let us know below...