We drive the new soft-top Volkswagen Beetle Cabriolet, following its debut at the LA Motor Show 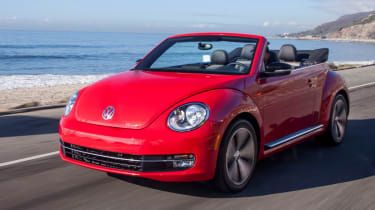 To our eyes, the Beetle Cabriolet is the best retro drop-top on the market. It’s not as much fun or as playful as the MINI, but it still handles well and the more spacious cabin and comfortable ride make it much easier to live with every day. Most importantly, VW has also ensured that it looks the part. The stumbling block for some buyers might be the relatively high price tag.

As the UK braces itself for sub-zero temperatures, VW has just opened the order books for its new Beetle Cabriolet. First deliveries here won’t be until next summer, when the weather is a bit fairer, but we got behind the wheel in sunny California to see what customers can expect.

Even in glamorous LA, the Cabriolet turns heads. VW’s designers have managed to create a chunky silhouette when the roof is in place that’s near-identical to the hard-top’s.

Once the roof is down it’s even more attractive, with a pram-style concertinaed look resembling the original Beetle’s soft-top. There’s a tonneau cover, but it’s a bit of a pain to fit so we expect most people won’t bother.

The benefit of this design is that once you’ve lowered the top – which takes 9.5 seconds and can be done at speeds of up to 31mph – you’ve got exactly the same amount of boot space.

The 225-litre capacity is 85 litres down on the hard-top, but way ahead of the equally fashionable MINI Convertible, which has only 125 litres. Better still, you can fold the rear seats to carry longer items – although the boot opening is rather narrow.

On the road, you’ll notice the solid feel of the standard Beetle has been retained, even though the roof’s been chopped off. Extra chassis bracing means there’s very little body shake, and the car deals with bumps well. Our Beetle featured big 18-inch alloy wheels, but still coped with some of LA’s more broken roads.

There’s not much difference between the way the hard-top and soft-top handle, either. The Cabriolet steers and corners just as well, and all models come with sophisticated multi-link rear suspension for improved handling. Smaller-engined versions of the standard Beetle have to make do with a basic torsion beam set-up at the rear.

Admittedly, the soft-top isn’t as much fun to drive as the darty MINI Convertible, but it’s a more grown-up, practical car you could conceivably live with every day.

Acceleration is almost up to Golf GTI standards, with 0-62mph taking around seven-and-a-half seconds, and you can enjoy the smooth growl from the exhausts – especially with the roof down. But buyers should probably fit the standard wind deflector, which is kept in a special storage pod in the boot, as it drastically reduces the amount of wind buffeting.

If there is one drawback, it’s the price: most versions of the Beetle Cabriolet cost a couple of grand more than the equivalent MINI Convertible. Our Sport model is £24,975, but for the money you’re getting a stylish and practical drop-top that has charm in abundance.