The VW Crafter shares much with the Mercedes Sprinter, and it makes a lot of sense with multiple wheelbase and body options 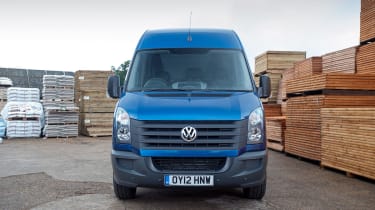 The Volkswagen Crafter (known internally as the LT3, as it was the replacement for the long-running LT series) was built alongside the Mercedes Sprinter in Germany from 2006 to 2016. It's a solid choice, while a major facelift in 2011 kept it competitive.

The Crafter and Sprinter vans are very different, with all the VW’s powered by the firm’s own 2.0-litre TDI and BiTDi (twin-turbo) engines with BlueMotion Technology offering excellent economy and emissions.

The Crafter panel van is offered in three wheelbases with four body lengths and three roof heights, providing a wide range of load volumes and payloads. The Crafter is also offered as a window van, single and double-chassis cab, dropside and tipper. It comes in versions rated at 3,000kg, 3,500kg and 5,000kg GVW, making it ideal for conversions and heavy-load carrying. 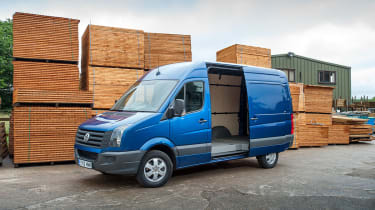 In fact in many cases it's a better van than the Mercedes Sprinter, with which it shares a chassis and body structure. The Crafter faces stiff competition from the likes of the Ford Transit and Iveco Daily. However VW claims the Crafter has industry-leading used van values, so you’ll be rewarded at resale time.

The original Crafter was replaced by the Crafter Mk2 towards the end of 2016. This van was developed in-house by VW and has no Mercedes connection, but it is also sold as the MAN TGE.

The Crafter’s 2.0 TDI four-cylinder engine comes in four guises offering 108bhp, 113bhp, 135bhp and 161bhp – they’re all single-turbo diesels apart from the last one, which has BiTDi twin-turbo technology.

They all have high torque outputs for strong low-rev performance. In standard trim, the more powerful engines are actually the most frugal, with the 163bhp engine returning up to 37.7mpg in fuel economy and emitting 208g/km of CO2 in Euro 6 spec.

VW’s BlueMotion Technology (BMT) is available across the engine line-up, adding cruise control, low-rolling resistance tyres, stop-start and energy recuperation, where the alternator charges harder when the vehicle is decelerating or braking to reduce the energy taken from the engine under power.

In addition, there are dedicated BlueMotion models based around the 108bhp and 135bhp engines. As well as the regular BMT features, these models have less weight and improved aerodynamics, but they can only be ordered as a short panel van at 3,000kg GVW. VW claims the BlueMotion van can return up to 42.2mpg with CO2 emissions of just 176g/km. All Crafter vans drive through a six-speed manual gearbox to the rear wheels.

The Crafter offers a wide spread of volumes and payloads, with three wheelbases, four body lengths, three roof heights and three gross weights. Even the smallest model has a 2,600mm-long load bay, while the largest can handle five Europallets.

The vans have a 1,300mm-wide sliding side door that permits the loading of a Europallet at the front of the load space. There are two load-lashing rings on the B-pillars, and between six and 12 tie-down rings in the floor of the van. A second sliding side door is available on the driver’s side as an option, while electric sliding doors can be aded, too. Fixed and removable tow bars were offered, while rear-bumper steps were also available.

The Crafter window van comes in medium and long wheelbases with two roof options, offering seating for up to nine people and their luggage. VW also offered single and double-chassis cab, dropside and tipper versions from the factory in its Engineered To Go programme, providing a single source for more specialised vehicles with a full VW warranty. 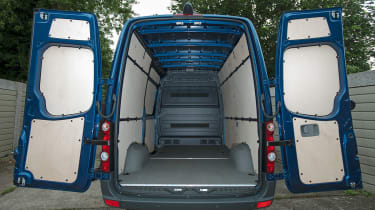 All Crafter vans have a full-height steel bulkhead, though window bulkheads were available and a bulkhead with a sliding door could be ordered for delivery vehicles, offering the driver a walk-through facility from the cab into the load area. VW also had a wide range of wooden and rubber floor coverings, hardboard and plywood side linings available for the Crafter.

Not surprisingly, the Crafter offers a similar range of bodies as the Mercedes Sprinter. It doesn’t, however, offer the wide range of smaller body volumes provided by the Ford Transit or the Vauxhall Movano range. As all Crafter vans use rear-wheel drive, there is no option for the low floor afforded by a front-drive chassis such as on the Citroen Relay.

As with all Volkswagen vans, the Crafter comes with ESC electronic stability control as standard. This puts the VW in line with the Mercedes Sprinter and Ford Transit, and ahead of the Vauxhall Movano, which only offers ESP as standard on rear-drive models. The Crafter also has electronic brakeforce distribution and a traction control system to assist the driver if the roads get slippery.

Optional daytime running lights were available and a passenger airbag could be added. Front passenger airbags, with side and front curtain airbags for passenger and driver, were also an option. Parking sensors in the front and rear could be added, or the van could be supplied with a reversing camera with display integrated into a 5.8-inch radio display. Volkswagens are known for their reliability and the Crafter comes with a three-year/100,000-mile warranty, in common with the market-leading Ford Transit.

The Crafter is powered by a range of 2.0-litre TDI engines which, though smaller in capacity than Mercedes’ 2.1-litre and 3.0-litre engines, or the 2.3-litre engines used in the Renault Master, offer plenty of power and torque. 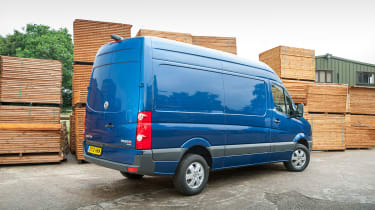 The bi-turbo 163bhp engine, in particular, delivers a very healthy 400Nm of torque, which is more than enough for rapid acceleration in all but the 5,000kg GVW models, and delivers easy cruising at motorway speeds.

All Crafter vans use a six-speed manual gearbox driving the rear wheels. There's no automatic or DSG option available, unlike the Sprinter’s automatic transmission or the Comfort-Matic automated gearbox in the Fiat Ducato. The Crafter offers assured handling and strong brakes though, and the high driving position provides a good view of the road ahead.

The Crafter has a typically tough-looking Volkswagen cab interior, with strong, durable but rather hard plastics in sombre greys and blacks. Firm seating is comfortable over long distances and the vans have a good driving position with seat height, and reach-and-rake adjustment. A height and reach-adjustable steering wheel was optional, though. There's lots of storage space in the Crafter’s cab, with a fold-down table in the back of the middle seat and overhead storage above the front windscreen. Electric windows are standard, as is cruise control.

(Widths are body width without mirrors. With mirrors 2,426mm)

(Widths are maximum, width between wheel arches is 1,350mm)