Volkswagen has added four-wheel drive to its Crafter large van. Should you consider it? 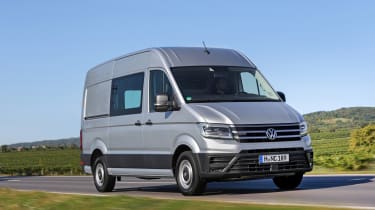 Expanding the Crafter range to include 4Motion and an auto box means there's even more choice for buyers, especially when you factor in the three body lengths, three roof heights and the chassis cab options. While 4Motion doesn't compromise load carrying very much, we'd only recommend it if you know for certain that you will take your Crafter off-road. However, the auto box is a great addition to the range for those that will need it.

We're already big fans of the Volkswagen Crafter here at Auto Express. It's our current Van of the Year, and now VW is making it even better by launching a variety of new transmission and drive layouts, including this 4Motion version.

The Crafter 4Motion adds four-wheel drive to the mix, and is designed to give extra traction for van users who venture off tarmac. In the UK, 4Motion will be offered on 3.5 tonne panel van, single cab and crew cab versions of the Crafter. Prices start from just over £33,000.

The latest Crafter was brand-new from the ground up when it was launched at the start of 2017, but VW has used plenty of technology from its car range to make the van feel more advanced than rivals like the Mercedes Sprinter, Renault Master and Vauxhall Movano. This 4Motion 4x4 derivative is a case in point. It's based on the front-wheel-drive Crafter - so it has the same low load height as the 2WD model - but VW has added the Haldex 4WD system that's seen across the VW Group passenger car range.

This is a reactive four-wheel-drive system, so in normal running 100 per cent of engine power goes to the front wheels. But if the Crafter's electronics sense a loss of traction, they can immediately send power to the wheels with the most grip - front or rear. In extreme situations, up to 60 per cent of drive can go to the rear wheels.

As mentioned, the main benefit of the 4Motion system is extra traction rather than off-road ability, as the van's ride height has been left unchanged. And thanks to the compact dimensions of the Haldex system, the rear load area offers the same volume as the 2WD van, although the payload has fallen slightly by around 130kg. 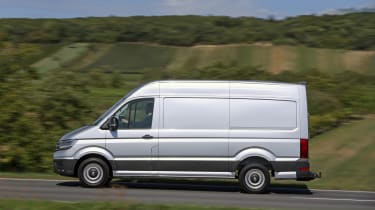 From the outside, the only difference between the Crafter 4Motion and the standard model is the addition of 4Motion badges. Inside, it's standard Crafter fare, so while the cabin is covered in hard-wearing materials, it's well built and features plenty of passenger car kit, such as phone connectivity, touchscreen infotainment including sat-nav, and a comfortable driving position.

On the road, you'd be hard-pressed to tell where the 4Motion is any different from the 2WD Crafter. On dry tarmac, power will almost always be fed to the front wheels, and even in the wet it will need to be very slippery under the tyres before the system activates. Luckily the roads of the Austrian launch event were just like that, and we can confirm that the 4Motion feels more sure-footed in the wet. 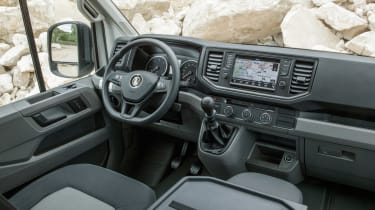 On a series of hairpin bends, the Crafter felt like it would practically tip over before it gave up grip, and that's unlikely to ever happen with a full load on board. We also tried 4Motion in a quarry, where again the extra grip of all-wheel drive meant the Crafter bounded up steep, wet, muddy slopes without breaking a sweat. And with hill descent control included, there's no reason why the Crafter couldn't tackle all kinds of ungraded road or forest track.

4Motion is available in the UK with a six-speed manual gearbox on the 140PS (138bhp) version of the 2.0 TDI diesel, while the 2.0 BiTDI 177PS (175bhp) engine comes with an eight-speed auto box. This gearbox is a torque converter auto, rather than the DSG twin-clutch box you'll find in VW's cars, and it's a silky-smooth performer. The only indication of an upshift is a change in engine revs, as there's no shunt from the transmission as it swaps gears. And it's the same story if you kick down to accelerate or if you are coming to a halt - it's a smooth performance that only makes the Crafter even easier to drive.

Do you think 4Motion is a good addition to the VW Crafter? Let us known in the comments below.