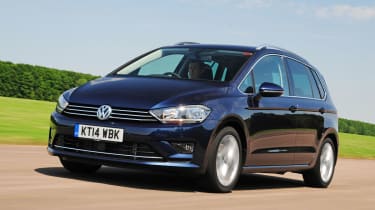 The VW Golf SV is much bigger than the Golf on which it is based and larger than the old Golf Plus it replaces. It’s an extremely competent five-seater MPV, which deserves to be on any buyer’s shortlist. Where it falls short, though, is that it lacks the flexibility and stand-out style of the class-leading Citroen C4 Picasso. Overall, the SV is a four-star car – but the GT model loses one star due to its unnecessary harder-riding sports suspension.

For those after a more practical Golf, but not an estate, meet the new VW Golf SV. It’s a direct replacement for the Golf Plus, and we have already tried a left-hand-drive version in Europe, where it’s badged Sportsvan.

However, this is our first chance to test a UK car. First things first, though, why the change of name? A spokesperson for Volkswagen UK said: “Let’s be honest, it’s not a van and it’s not particularly sporty.” The SV is based on the Golf’s MQB architecture, but it’s about 80mm longer, 80mm wider and 120mm taller. As a result, knee, head and shoulder room are good in the back, even for adults.

The only niggle is that the floor in the back isn’t totally flat, like in a Citroen C4 Picasso. Thankfully, the central tunnel isn’t too intrusive and the footwells are big, so it’s not such a problem for the person in the middle rear seat. The SV’s increased dimensions also mean a boot that is more than 30 per cent larger than in the VW Golf. Capacity is 500 litres, although you can increase this to 590 litres by sliding the rear seats forward. There’s also a movable boot floor, and in its highest position there is no load lip to lift items over. With the back seats folded down, you get a flat load bay, too. 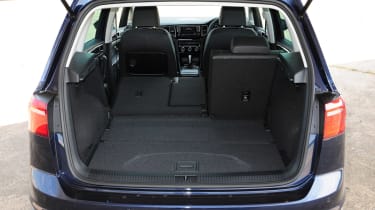 Sure, it may help counteract body roll slightly and be a great idea in Germany, where the roads are fast and smooth. But stiffening up the ride on a car with supposedly no sporting pretentions is ludicrous in a country like Britain, where the roads are so bad. And whereas Audi will let you de-select the stiffer suspension from its Sport and S line models, VW won’t let you do that with its GT trim. Fitting adaptive dampers – which have a comfort mode – may help, but that will cost an extra £800. To be fair, the ride on the GT model isn’t terrible, it’s just unnecessarily firm for an MPV.

The rest of the driving experience is very good, though – it feels like a slightly bigger and heavier Golf, which is what the SV is. It’s generally very quiet, too, although the 225/45 tyres fitted to the 17-inch alloys of the GT make quite a bit of noise on rough motorway surfaces.

Wind noise, however, is well insulated despite the taller body – the benefit of which is a raised driving position. Combined with good all-round visibility, this makes the SV easy to drive in town. 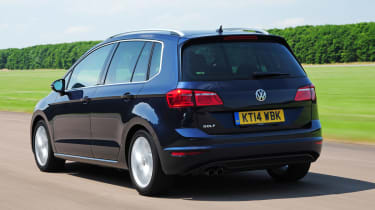 The slick six-speed DSG auto box fitted to our car helps, too, and if you plan to regularly travel fully loaded on the motorway, you’ll also appreciate the extra pulling power of the 2.0-litre diesel over the lesser engines.

Whichever model you go for, the SV’s well built cabin should be able to cope with the rigours of family life and you can store the associated paraphernalia out of sight in the extensive array of cubby spaces.

You also get the same easy-to-use 5.8-inch touchscreen as in the Golf, so there’s all the connectivity you could need. The dash design is almost identical, too, which means it’s a bit conservative compared to that in the flamboyant C4 Picasso. It’s the same story with the austere exterior design, too.

And this sums up the Golf SV. It’s not the very best five-seater MPV, but it still has plenty of appeal… so long as you avoid the stiffer suspension of the GT model.