At just over £18k the Volkswagen Golf 1.0 S is the entry-level model in the range, but is it worth avoiding? 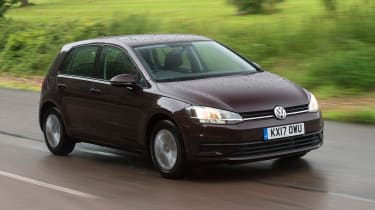 Despite being the cheapest, buyers opting for the entry-level Volkswagen Golf needn’t feel short-changed. The S-spec offers more performance and equipment than you might expect, while retaining the excellent road manners and high quality interior found higher up the range. Better value can be found elsewhere in the family hatch class, however.

It’s not often that we get the chance to drive an entry-level version of a mainstream car these days. As more and more buyers opt for tempting monthly finance deals, stepping up to a higher-spec trim is more affordable than ever.

But what if you want a well-built, spacious and comfortable car, and have no earthy need for any of the bells and whistles of flagship models?  We’ve driven the most basic Volkswagen Golf in 1.0 S guise to see what you're losing out on by choosing the cheapest version.

For £18,420, this five-door model is near-enough the least expensive Golf you can buy. There is a three-door model, but both cars come with an 84bhp 1.0-litre turbocharged petrol engine. 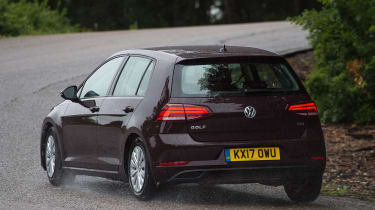 In the past, S-spec VWs were about as well-appointed as a disused barn, but that’s no longer the case. Sure, you don’t get alloy wheels, but you do get an eight-inch touchscreen with DAB radio and Bluetooth, electric windows front and rear, and even autonomous emergency braking. Certainly, bar the omission of sat-nav and cruise control, most people would find it has all the kit they'd reasonably want.

Most importantly, though, it still retains the important details that make the Golf one of the very best in terms of cabin quality. There’s the same granite-hewn solidity to every control, switch and trim panel, making it feel like you’re in something more expensive than you actually are. The glossy screen wouldn’t look out of place in a pricier model, either, and does without some of the gimmicky gesture control features offered on VW’s high-end units.

There’s more surprise and delight when you hit the road. The TSI badge on the bootlid might fool others into thinking you’ve picked a higher-spec car, but the 1.0-litre unit is the least powerful engine you can get in a Golf. The 84bhp output is worryingly modest for a car that weighs nearly 1,300kg, but the healthier 175Nm torque figure is what ensures this entry-level car doesn’t feel as sluggish as you’d expect.

Granted, with a 0-62mph time of 11.9 seconds it won’t be winning any sprint races, yet it feels more urgent than that in normal driving thanks to a strong mid-range. There little point in revving it beyond 5,000rpm, but if you do the motor remains super-smooth and refined, with a muted yet pleasing three-cylinder thrum. 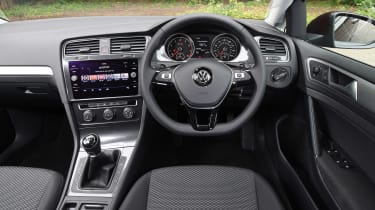 The five-speed manual ‘box means you’ll find yourself holding on to ratios more than in the six-speed models, but the shift action is light and precise. While it’s not an ideal motorway companion, it doesn’t feel too out of its depth, helped by the Golf’s impressive wind and road noise isolation. If you’re planning to carry passengers on a regular basis, then the 108bhp version of this engine makes things a bit more effortless, too.

The only way in which the 1.0-litre engine has affected the handling is that you tend to approach corners carrying less speed. It retains every Golf’s strong handling poise and remarkably composed ride; the latter aided by the tiny 15-inch steel wheels and thick sidewalls.

Our only real complaint is that it isn’t as cheap as we’d like it to be. A number of the Golf’s key rivals can be had with more power or equipment for the same money, while the VW Group’s own rivals (the SEAT Leon and Skoda Octavia) are also better value to begin with.