A tweaked version of the VW Golf GTE is in the pipeline, and we’ve been for a quick drive in an early prototype 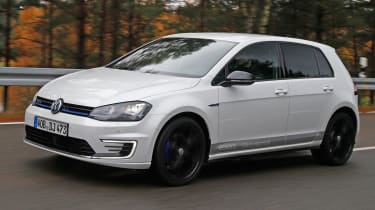 Volkswagen is hoping to boost the image of its plug-in Golf with a high-performance version of its GTE hybrid model - and Auto Express has been for a quick drive to see how it’s shaping up.

The German manufacturer is aiming to ramp up its reputation for electrification in the build-up to the arrival of its forthcoming I.D. range, due before the end of the decade. As part of this, engineers have taken the existing eco-focused GTE and re-written the software that controls its gearbox-mounted electric motor – allowing it to focus more on acceleration than efficiency.

The VW Golf GTE Performance, as the prototype is known, has been freed up to use “more power and torque”, according to VW engineers - although they’re tight-lipped on how much has been added to the regular GTE’s 201bhp and 320Nm. 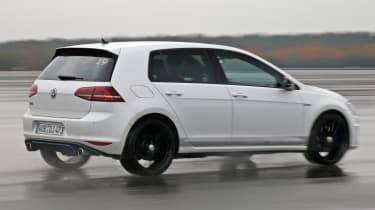 Many of the GTE’s existing parameters remain, including the 75mph limit for pure-electric running. But there’s a bit more punch from the electric motor to propel you to that speed - more than enough shove, in fact, for the traction control light to start flickering as we put the system through its paces at a soaking wet Ehra-Lessien test track in Germany.

In GTE mode, and even on a near-depleted battery, the electric motor provides useful assistance to the 1.4-litre TSI petrol engine, which is unchanged from the regular car. And of course, this mode allows you to shift gears via steering wheel paddles, as well as offering some aural pleasure from the combustion engine revving up as you accelerate.

It’s a tantalising glimpse of how VW could inject a bit more fun into a model that does, after all, contain the letters ‘GT’ in its badge. And we’d be surprised if a version of this prototype, perhaps with VW’s latest 1.5-litre ‘Evo’ engine instead of the 1.4 - isn’t part of the model line-up for the Mk8 Golf, due in 2019.