Firm ditches V6 to give new flagship tuned version of GTI’s turbo. Is it more convincing than its big-selling brother? 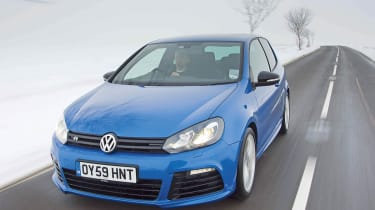 With the old R32, more power never equalled a significant performance advantage. But now, there’s no question that the Golf R is a step up from the GTI. You’ll certainly pay for the privilege, as a starting price of just over £30,000 is a considerable jump up from the GTI. However, the R more than backs this up with big-league performance and a more focused chassis. At last, the Golf has a worthy, if expensive, flagship

Volkswagen’s Golf GTI has always been a tough act to follow. That’s why the four-wheel drive, V6-engined Golf R32 never quite established itself as a convincing flagship of the MkV range.

But could the MkVI version change that? VW has ditched the naturally aspirated V6, and instead extracted more power from the GTI’s lighter, more efficient 2.0-litre four-cylinder turbo. The result is an all-new model: the Golf R.

Under the bonnet, there’s a highly tuned version of the powerplant from the MkV GTI, rather than the newer MkVI motor. The block is reinforced and the cylinder head replaced, while special pistons, conrods, high-pressure fuel injectors, a new turbo and a more effective intercooler are used.  The     results are impressive: 265bhp and 345Nm of torque make it the most potent Golf yet. That’s a major step up from the 200bhp GTI, not to mention the old R32. It sounds brilliant, too.

Crucially, the turbo engine is much cleaner and more fuel efficient than the V6-engined R32. Emissions drop from 257g/km for the MkV to 199g/km for the Golf R. Fuel economy is up around 4mpg to 33.2mpg on the combined cycle for a manual model. Fitting the optional twin-clutch DSG transmission bumps that figure up to 33.6mpg.

The Golf R is a seriously quick car – it’s a clear league above the GTI, and significantly livelier than the R32 it replaces. It’s not as rabid or unruly as the Ford Focus RS, but that means you can extract more of the hatch’s performance more of the time.

Much of this is due to the new 4MOTION all-wheel drive transmission, which can send as much as 100 per cent of the engine’s torque to the rear wheels if it senses the front tyres are struggling. And with new springs and dampers, revised anti-roll bars and specially tuned power-steering, it’s no wonder the R has a sharper and more direct feel than the GTI. But we’re pleasantly surprised that this doesn’t come at the expense of comfort – even though the newcomer runs on stiffer, 25mm lower suspension.

Less pleasing is the fact that VW persists in making its Adaptive Chassis Control (ACC) suspension an option on the Golf – even on its £30,000 flagship.

Our car didn’t come equipped with the switchable two-stage dampers, but it still felt spot-on. Whether the R would strike such a fine balance between ride and handling if it were equipped with the optional 19-inch wheels is debatable. We tried the Golf R with the DSG transmission, and although this delivers rapid and tremendously smooth gearshifts, it didn’t feel quite so convincing as it does in the GTI.

In ‘D’ mode, the box is too keen to short-shift into the highest possible gear; in ‘S’ mode it’s the opposite, as it’s a bit too keen to kick down.

The set-up is great when you override the automatic modes and use the button-style paddles, but there are times when you would rather let the gearbox do the work – which seems a shame in a car this driver focused. It does at least suit the Golf’s no-fuss nature. Even on demanding roads, you never sense anything unsettling going on beneath you. All you get is a level of assurance and ability that makes the R’s front-wheel-drive rivals feel a little ragged.

Rival: Ford Focus RS The Ford is as extreme as they come. We drive the tuned Graham Goode version on Page 30, but even the standard 301bhp RS feels as if it would suit 50bhp less power. The Golf R will appear tame to owners of the Ford, although there isn’t much between them on the road – and the VW has broader abilities and appeal.