The petrol version of the Volkswagen Golf MK7 is another winner, mixing punch and refinement 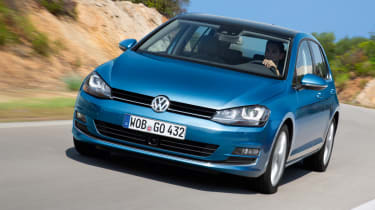 This Golf 1.4 TSI can’t match the cleanest diesels for emissions, but it’s not far off. Smooth power delivery and strong mid-range punch make the most of the Golf’s talented chassis, while the DSG box is intuitive and fast. It’s hard not to be blown away by the car’s breadth of abilities – it’s a cliche, but this new Golf could be all the car you’ll ever need.

In our first drive, the new Mk7 VW Golf well and truly lived up to our high expectations. But that was the range-topping 2.0 TDI; now it’s time to test the 1.4 TSI engine – the more powerful of the two petrol engines.

In the previous Golf, the 1.4 TSI was the most popular choice for private buyers, but this engine is all-new. The 138bhp turbo, first seen in the Audi A1 Sportback, features clever cylinder shutdown tech, which senses when there’s no need for all four cylinders and shuts down two of them on the move.

Along with other fuel-saving measures, such as stop-start, the result is better fuel economy than the slower 84bhp 1.2 TSI and lower CO2 emissions of just 109g/km when twinned with a DSG dual-clutch auto.

Put your foot down and performance is strong, with plenty of torque to pull you along from low revs. The engine doesn’t feel quite as potent as it does in the A1, but throttle response is crisp and it revs smoothly to the limiter. Its real strong point, though, is refinement. On part-throttle at cruising speeds, the engine is near-silent, and even when you work it hard, there’s only a gentle hum from it.

Although most buyers will opt for the manual gearbox, the DSG transmission works really well. In auto mode, the distinct gearchanges are perfectly judged, but take control with the paddles and you can make the most of the Golf’s huge front-end grip and superb neutral balance.

Our test car was also fitted with optional Dynamic Chassis Control (DCC), which governs the suspension firmness and adds a fifth Comfort mode to the old car’s driving settings. Even in the firmest Sport setting, though, the Golf flows majestically with the road surface and refuses to get flustered. But our test route was on smooth Sardinian tarmac, – a thorough going-over on bumpy UK roads will better highlight any inadequacies.

The evolutionary design is far from radical, but it’s crisp and modern, while the interior has taken another leap forwards in quality. The technology count has risen, too, despite prices barely changing over the outgoing car.