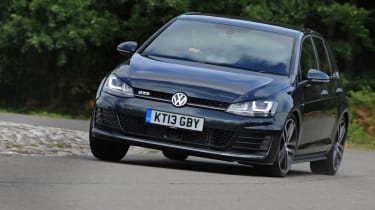 Its unassuming character was always part of the charm of the outgoing GTD, but the new car is so capable that it verges on being too easy to drive. We love the sharp styling and the healthy in-gear punch, but we’d stick with the manual. The DSG adds little to the dynamics and plenty to the final price, and spoils those class-leading CO2 figures. This is a car you admire rather than fall head over heels for.

The new Volkswagen Golf GTD blends hot hatch performance with fuel-sipping economy and family hatch practicality. So it could be the ultimate all-rounder, and the perfect company car – and after it impressed in Issue 1,272, we tried it on UK roads for the first time, and got our first taste of the new six-speed DSG auto box.

This dual-clutch set-up is identical to the Golf GTI’s – and adds a sizeable £1,415 to the overall price. Fortunately it has no effect on performance, with 0-62mph still despatched in 7.5 seconds and the surge of in-gear torque delivered even more smoothly than with a manual. As a result it’s deceptively easy to build up speed in the Volkswagen Golf GTD, as neither the supple suspension nor the hushed engine provide a clue about how fast you’re travelling.

That makes the car as capable cruising on motorways as it is blasting away from the lights in town. Throw it into a series of corners and the Golf GTD grips tenaciously, and the new XDS+ system brakes the inside wheels (front and back) to further improve traction and help reduce understeer through tight turns.

The same progressive steering rack as in the GTI requires fewer turns lock-to-lock and helps the car feel more responsive to the driver’s inputs. Yet despite being stuffed with clever technology, the new GTD runs the risk of feeling too polished for buyers searching for real dynamic thrills – just as the new GTI does. This problem is exacerbated by the DSG, which is far from perfect.

In automatic mode the changes aren’t quite as smooth as with the eight-speed self-shifter that’s fitted in new BMWs, and occasionally clunky downshifts make you lurch forward in stop-start traffic.

This VW Golf GTD option also has a negative impact on efficiency; the DSG car promises 60.1mpg and emits 122g/km of CO2, compared to 67.3mpg and 109g/km in the manual. And while the emissions hike doesn’t sound like much, it means fleet buyers pay £209 a year more in Benefit in Kind tax.

Yet despite these niggles, it’s hard to argue with the new GTD’s sheer class. The beautifully built interior offers the kind of fit and finish that’s normally reserved for the plushest executive saloons, and stylish touches such as the tartan cloth seats and alloy pedals add a dash of excitement to the smart and simple layout.

Our test volkswagen Golf GTD model was fitted with the enhanced touchscreen infotainment system and high-performance Dynaudio HiFi, too. While they add to the premium appeal, these extras also push the price past £30,000. That puts the VW up against some pretty stern competitors, including the BMW 125d M Sport and Mercedes A220 CDI.

The GTD certainly has the potential to measure up to these rivals, but for many buyers the regular Golf 2.0-litre TDI will offer a very similar driving experience for an awful lot less.