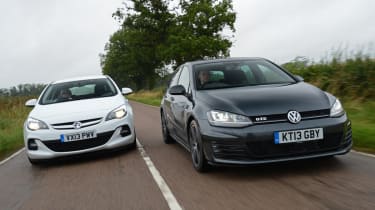 Diesel hot hatches are nothing new, but over the past year or so their popularity has rocketed. Promising scorching performance, low running costs and family-friendly practicality, these machines are the ultimate all-rounders. The latest model to stake its claim to the class top spot is the new VW Golf GTD. Based on the new MkVII, it gets 181bhp and the same focused suspension as the petrol GTI. Yet in six-speed manual form, it returns a claimed 67.3mpg and emits just 109g/km of CO2. We tested it with VW’s DSG twin-clutch gearbox, which reduces economy to 62.8mpg, with still-reasonable CO2 emissions of 119g/km.

Before VW opens the champagne, however, the Golf must face the newly facelifted Astra. It’s been around for three years now, but a thumping new 192bhp twin-turbo diesel promises to revive its fortunes. Better still, it undercuts the VW on price. So which of our fast and frugal hatches makes more sense?

In the final reckoning, the Golf GTD takes a comfortable victory. It looks smarter and has a classy, more refined interior. It’s also every bit as fast as the more powerful Astra, and feels better composed in corners. As a bonus, lower running costs and a longer list of standard kit offset its higher price.

The Astra’s new engine is a strong performer, while the subtle facelift has given the Vauxhall greater kerb appeal. However, it can’t match the Golf for equipment, and its weaker residuals and higher running costs make it more expensive in the long term.

Our contenders both use 2.0-litre common-rail diesels, but the Astra’s twin turbos boost power to 192bhp and deliver 400Nm of torque at just 1,750rpm. The Golf’s TDI is shared with other hot diesels in the VW Group, including the SEAT Leon FR and Skoda Octavia vRS. Its figures of 181bhp and 380Nm aren’t quite as impressive as its rival’s, but the GTD’s driver profile system allows you to sharpen the throttle to make the car feel more eager.

Despite their different power outputs and gearboxes, our two rivals were evenly matched in the performance tests. From a standing start, the Golf ruled the roost, sprinting from 0-60mph in 7.1 seconds – more than a second faster than the Astra. Yet the Vauxhall clawed back ground on the move, using its thumping 400Nm of torque to demolish the 50-70mph sixth-gear test in only 6.9 seconds – nearly two seconds faster than the VW managed.

Both cars have stop-start systems and long-striding six-speed gearboxes, but the Golf put in a stronger display at the pumps, returning 46.6mpg. It also has a much lower CO2 output as a manual or an automatic.