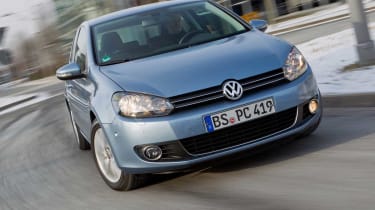 It may showcase Volkswagen's eco technology, but the VW Golf Plug-in Hybrid is the worst version of the Golf Mk7 we’ve driven. The jerky drivetrain isn’t its biggest problem (although it needs to be smoother). It’s the price that makes it a very difficult car to justify. Sure, if you want a swift car that’ll run on electric power for a daily commute of around 30 miles each way, this could be for you. But we’d find it difficult for the numbers to really stack up.

As if there weren’t enough engine and trim combinations for your local VW dealer to explain on the new Golf, a plug-in hybrid will arrive at the end of next year, to complement the all-electric e-Golf that turns up in the summer.

The Volkswagen Golf Plug-in Hybrid (expect it to get a snazzier name by this time next year) combines the popular 148bhp TSI petrol engine with a punchy 108bhp electric motor. It’s a pairing that’ll also be seen in the Audi A3 e_tron and in the Golf it promises a claimed 188.3mpg, with a dash from 0-62mph in just 7.6secs.

It certainly feels swift enough, but it’s no GTI – to look at or to drive. It takes the restrained Bluemotion themes with eco-friendly wheels and tyres and a blue strip across the front grille and through the headlamp units where the GTI gets its red trim. Hidden behind a blue-rimmed, oversized VW badge on the nose is the charging socket.

There are four driving modes: when you start up, normal hybrid mode will be chosen for you, making the best use of the petrol/electric drivetrain. E-mode, unsurprisingly, will stick with electric power with a range of around 30 miles, Charge will keep the engine running and do all it can to refresh the batteries while on the move, and Maintain will reserve battery power for later in the journey when it can be used to best effect.

None of them provides particularly smooth progress, with the six speed dual-clutch DSG gearbox mostly to blame. Power comes in abruptly, while the brakes can grab and the gearbox jerk as energy is recovered as you slow down. Let’s hope there’s time for VW to smooth things out, although the DSG box has never been the slickest of downchangers.

The quietness of the power units, whichever combination is being used, sits nicely with the well-balanced ride of the Golf. The batteries under the rear seats don’t have much of an effect on comfort or handling, while passenger space is as good as in any other Golf. Right at the back, only the shallow storage area underneath the boot floor has had to go, so there’s still plenty of luggage space.

The biggest problem for this Golf, though, is likely to be its price. The performance/economy calculation might work for some, but as one of those cars that exists to ‘highlight the technology’ the price is likely to be scarily close to the range topping Golf R, which costs £29,900.

Let’s be honest, this car is mainly aimed at the diesel-phoebic US market. For us, the brilliant Bluemotion diesels make far more sense.