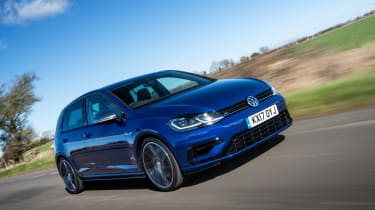 The choice between a VW Golf R and its similarly impressive GTI siblings boils down to being able to exploit the R’s upgrades over slightly less powerful, front-wheel drive hot hatch – and you need to be honest with yourself, because that price tag places the R firmly in sports car territory. Given the extra space and its subtle looks, this Q-car is arguably the pick of the range.

The Golf R's discreet looks mean it won't draw the kind of attention that the big wings and bright colour schemes of rivals can attract, leaving you to go about your business and revel in the R's performance and practicality. It’s a performance car for all seasons.

If you want a fast car that's also very discreet, then the Volkswagen Golf R is well worth a look. It's for sale as the flagship of the Golf range, and slots in above the Golf GTI in the line up. It comes as a five-door hatchback, with the more practical estate now discontinued. All cars use a 2.0-litre TSI turbocharged petrol engine packing 296bhp, with power going to all four wheels via VW's 4MOTION four-wheel drive system.

As a result, the Golf R has ballistic performance and plenty of grip to make it a fantastic all-weather performance car. And yet, to look at, it could easily be mistaken for a diesel Golf in sporty R-Line spec. For some buyers that's a huge bonus, putting the fastest Golf ahead of lairy-looking rivals such as the Mercedes-AMG A45, Ford Focus RS, Audi RS 3 Sportback and Honda Civic Type R.

In many ways, the Golf R is something of an unsung hero in the Golf range. Subtle colours and an understated bodykit contribute to that, while the only real clues to the car's potential are its 18-inch wheels, lowered suspension and four exhaust tips poking out of the rear bumper. This really is the definition of a Q-car – a vehicle that doesn't draw attention to itself, but offers searing pace that will surprise passengers and other road users alike.

The Golf R joined the Mk7 range not long after it first arrived in 2012. During that time it has been offered with either a six-speed manual or six-speed DSG auto gearbox, although all versions are now DSG-only. Launch Control is fitted as standard, and you should be able to match the quoted 0-62mph time of 4.7 seconds without much problem – although we've tested the Golf R in the past and recorded even faster figures.

At just over £37,000, the price reflects that the R is the top-spec Golf in the range. All cars are well equipped, while fuel economy quoted at up to 32.8mpg under the WLTP test is reasonable for a car with such high performance.

For an alternative review of the latest Volkswagen Golf R Hatchback visit our sister site carbuyer.co.uk