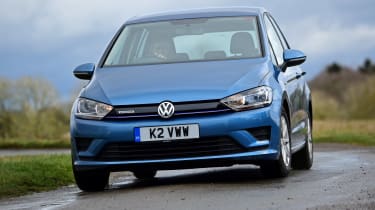 Unless CO2 tax bands dictate what you drive, we’d advise you to steer clear of the Golf SV BlueMotion. For the same price, you can get an SE-spec model with the same 1.6-litre diesel, a stack of extra equipment as standard and – in the real world – economy figures to match. But if company car tax applies to you, this Golf SV is a practical and sensible MPV for growing families.

Every gram of CO2 counts these days, especially if you’re a company car buyer, which is why the BlueMotion forms an integral part of the Golf SV range. It’s the only model in the line-up to emit less than 100g/km, so it’s exempt from road tax, but is it any good?

Like every other SV, it’s 80mm longer, 80mm wider and 120mm taller than the standard Golf hatchback on which it’s based, and bigger still than the old Golf Plus it replaces. 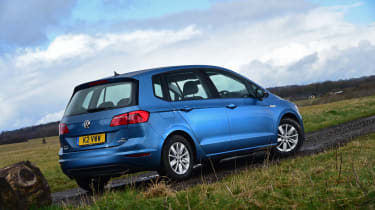 Where this model differs is with the fuel-sipping tech that’s been added. A blanked-off radiator grille improves aerodynamic efficiency, while smaller 15-inch alloys are wrapped in low-drag tyres. The changes clearly work, cutting CO2 by 6g/km and boosting efficiency by 3.9mpg, to 95g/km and 76.3mpg, but they don’t do much for the SV’s visual appeal.

Even in sporty GT trim, the car lacks that sparkle you get from a Citroen C4 Picasso and the 15-inch alloys make it look bloated from certain angles. 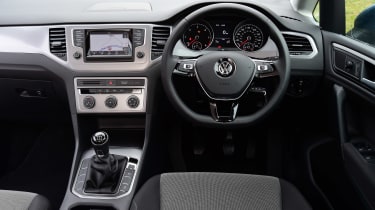 The 1.6-litre four-cylinder TDI diesel engine develops 108bhp and 250Nm of torque, while the BlueMotion comes with a longer-geared six-speed manual box to boost efficiency. It’s smooth and surprisingly muted, if a little sluggish and hesitant to deliver its power.

From behind the wheel it doesn’t feel any larger than a standard Golf hatchback, and you can barely detect the added height, as it stays relatively flat and stable through quicker corners.

Disappointingly, however, this SV doesn’t really deliver on its promise. We managed just over 50mpg in a day’s driving on a variety of roads – and any other diesel SV is capable of that, so don’t be fooled by the BlueMotion’s headline stats. 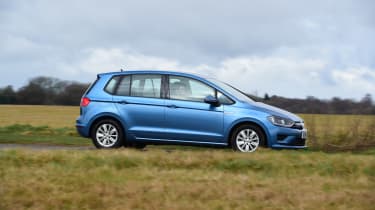 Inside, it’s familiar VW fare, with soft-touch materials on contact points and robust plastics in harder-to-reach places, but the cabin reflects the lack of excitement outside. It’s coated in swathes of grey, from the cloth seats to the dash materials, while there are countless blanked-off buttons on the centre console.

And it’s not as if it’s cheap. At £22,915, the BlueMotion is £1,065 more than the entry-level S it’s based on – a premium that buys negligible efficiency improvements and awkward exterior styling.