Punchy 1.0-litre turbo triple makes the Volkswagen Golf SV a more refined place to be, but is it frugal? 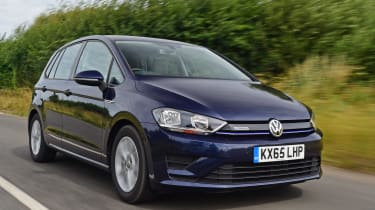 The petrol-powered VW Golf SV BlueMotion is almost as frugal in the real world as its diesel counterpart, yet it’s more refined and kinder to the environment. You can put aside concerns about a 1.0-litre engine in a car this size, too, as it offers more than enough in-gear punch for most needs and is smooth on the move. The SV isn’t the most versatile MPV, though, so buyers looking for outright practicality might be better off elsewhere.

Diesel power isn’t for everyone, and Volkswagen is now catering for drivers who want fuel-sipping efficiency with a cleaner petrol engine by offering an expanded BlueMotion range throughout its model line-up. And the family-focused Golf SV is the latest car to benefit from this treatment.

Last year we tested the VW Golf SV BlueMotion diesel, which despite lofty efficiency claims, didn’t really deliver on its eco-car promise. But you can now spec the mini-MPV with VW’s 1.0-litre TSI turbo petrol engine, which has impressed us in both the Polo supermini and Golf hatchback. But the SV is longer, wider, heavier and a full 120mm taller than the regular car. So does that dent its eco credentials?

In short? Not really. The official combined economy figure drops from 65.7mpg to 62.8mpg, which isn’t bad, but company car drivers may be put off by the fact the SV sits one tax band higher than the Golf: 105g/km for the former plays 99g/km for the latter. Still, no petrol-powered versions of the Mercedes B-Class or BMW 2 Series Active Tourer can trump that. 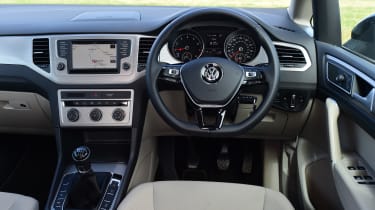 More importantly, though, the petrol SV BlueMotion delivers away from the lab testing cycle. We found 45mpg easily achievable in mixed town and motorway driving, while nearly 55mpg is attainable on a sensible long run, making it almost a match for the diesel version.

But the petrol offers a more enjoyable driving experience, too. Other than the typical pulsing thrum at idle, the three-cylinder engine is very refined and smooth at most speeds, with only a pleasingly off-beat note as the backing track at higher revs.

You don’t get the instant low-end punch that you would in the diesel, though extending the petrol unit into the mid-range is no hardship. The 0-62mph sprint is taken care of in 10.4 seconds (seven-tenths longer than in the regular Golf) so it never feels fast and may struggle more than the diesel when heavily laden, but you’re rarely left wanting for power in normal driving. The six-speed gearbox helps: some eco-specials are lumbered with long-geared five-speed units, but the extra cog and closer ratios stops the Golf from bogging down.

Having the lighter petrol engine at the front also helps the SV feel more agile than it does with a diesel engine. Still, it’s composed rather than fun, with a good balance of ride and handling (particularly on the small 16-inch alloys BlueMotion spec necessitates) accurate steering and a slick gearshift. The low rolling-resistance tyres kick up some road roar, but it’s not intrusive. 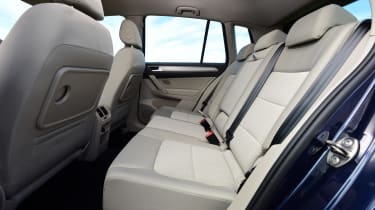 It’s a pity that the tall-sided exterior is so bland to look at, but the interior is typically VW - it may play it safe in terms of design, but the quality of materials and switchgear is exceptional for a car of this class.

It’s not all that impressive as an MPV, though, as it lacks the seating flexibility of cheaper rivals like the Citroen C4 Picasso. It many respects it feels like a slightly bigger Golf, which is fine, but that means most buyers would be better off with a proper five-seat people carrier.