The standard Polo is a great supermini, but the GTI model falls short of its hot hatch rivals 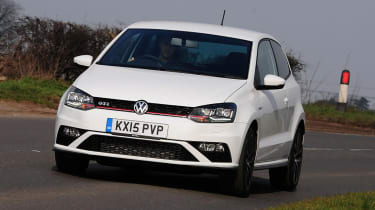 Over the years, Volkswagen has built faster versions of the Polo, ever since it introduced the rare Polo GT in 1979. Things were turned up a notch with the Mk2 and the supercharged Polo G40 coupe, while the GTI badge first appeared on a limited-run Mk3 model in 1998.

The 1.8 TSI makes a healthy 189bhp, which helps the Polo GTI accelerate from 0-62mph in 6.7 seconds, while the DSG model is marginally slower at 6.9 seconds. And with 320Nm of torque on offer from 1,450rpm, the Polo GTI has plenty of mid-range punch for overtaking.

A Sport button on the dash enhances the car's responses, but the Polo GTI isn't as accomplished as rivals such as the Ford Fiesta ST or SEAT Ibiza Cupra. It's not as refined or comfortable as the Ibiza when you're taking it easy, either, which is surprising when you consider that the Polo and Ibiza have the same running gear under the skin.

One advantage that the Polo does have over the Ford and SEAT is that's it's available with five doors, so it's the supermini hot hatch of choice if practicality is just as important to you as driving thrills.

Compared to its supermini hot hatch rivals, the VW Polo GTI feels like a sensible choice. There’s still impressive performance on offer and a five-door option boosts its practicality, but a high price counts against it in a sector where fun and affordability matter more. Ultimately, the Polo GTI doesn’t have as much character as a Ford Fiesta ST or SEAT Ibiza Cupra, but if quality and refinement matter more, then it's worth a look.

A decent all-rounder, although rivals are more focused and fun to drive

In an effort to give the Polo GTI greater driver appeal, VW has reintroduced a manual gearbox. You can still get a seven-speed DSG auto box for £1,245 extra, but the positive shift of the six-speed manual definitely makes you feel more connected with the car.

Power comes from a 1.8 TSI turbo petrol engine with 189bhp and a meaty 320Nm of torque on offer from as low as 1,450rpm, so the Polo GTI pulls hard in the low gears. VW claims a 0-62mph time of 6.7 seconds, while the DSG-equipped car is marginally slower, at 6.9 seconds, and we've recorded a best time of 6.4 seconds in our tests. The Polo also features a Sport button on the dashboard that sharpens throttle response and turns up the engine noise produced by the sound synthesiser. A hollow-sounding snarl is piped into the cabin when you’re fully on the power – it’s not a natural noise like in a Ford Fiesta ST, but it does ramp up the excitement when driving fast. 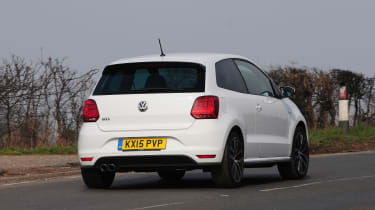 The Polo’s torque means it's fast in-gear, and its in-gear times in the higher ratios are impressive, with 50-70mph in sixth taking 5.4 seconds. However, the GTI’s lack of drama means it never really feels exciting.

In corners, there’s lots of grip, but the chassis is so composed and controlled that the MINI Cooper S, Ford Fiesta ST and Peugeot 208 GTi feel livelier and more engaging. If you've added the optional adaptive dampers, Sport mode also firms these up, but the Polo GTI doesn’t have as much grip as the closely related SEAT Leon Cupra. The steering isn’t quite as accurate, while the front tyres don’t bite as hard. Traction out of corners isn’t as good, either, even though both the VW and SEAT feature the same XDS torque vectoring to help put power down.

Squeeze the throttle on the exit of a corner, and the Polo’s wheels will scrabble for grip in situations where the Ibiza drives hard. The GTI isn’t quite as compliant in Normal mode, either. Both cars ride firm, but in the Polo, you’re more aware of bumps that don’t seem to unsettle the SEAT quite as badly.

All these traits combined mean the GTI doesn’t quite inspire the same level of confidence as you feel in the Cupra, which allows you to drive harder and carry more speed. Essentially, the SEAT’s more fun when you want it, and more comfortable when you don’t – which is what these cars are all about.

Supermini hot haches can be pricey to run, but the Polo GTI is reasonable for running costs

The three-door manual Polo GTI is cheaper than the rival Peugeot 208 GTi, but whichever Polo you go for, you’ll be disappointed by its lack of standard kit. Sat-nav, cruise control, parking sensors and climate control, all standard on the Peugeot, add £1,880 to the VW’s price tag.

Hot hatches have made great strides in efficiency as well as performance, and the stop-start-equipped Polo promises 47.1mpg economy, while emissions of 139g/km for the manual model are competitive in the class. The DSG version is even better, at 129g/km.

With its simple lines and upmarket cabin, the Polo has gained a reputation for trying to offer the qualities of the Golf in a supermini package. The GTI model takes this formula even further, as the DNA of its larger hot hatch sibling runs through the car’s styling.

The new Polo features red pinstripes on the nose like the Golf GTI, while the honeycomb grille and lower air intakes add to the sporty look. LED headlamps are standard, and these have red detailing and a distinctive crosshair motif within the light clusters.

Elsewhere, you get 17-inch, two-tone alloys, GTI badges on the front wings and deep side skirts, while at the back, there’s a tailgate spoiler, tinted lights and a deep bumper with a pair of chrome exhaust tips poking out the back. Overall, the Polo GTI is subtly aggressive, and like its Golf sibling, looks best in solid colours. It comes in black as standard, but white and red are £270 and £335 options respectively, while metallic silver, blue or black cost £545.

Inside, the homage to the larger Golf GTI continues. There’s grey chequered Jacara cloth sports seats and a GTI-branded multifunction steering wheel with red stitching, while gloss-black trim is added to the centre console for a classier look. Alcantara is available as a £965 option, but the standard cloth seats look great and add a flourish to the fairly dark cabin, plus they offer plenty of support for fast driving.

There’s no doubting that the Volkswagen seems a cut above in terms of cabin quality, but overall the Polo’s interior is reserved when compared to the flamboyant, retro-themed MINI Cooper S’, plus the touchscreen is smaller and its graphics aren’t as clear. There’s no faulting the quality, but the MINI’s is just as good, and the Peugeot 208 GTi’s cabin is arguably more stylish.

GTI has a smaller boot than the standard Polo, but five-door option is a bonus for this hot hatch

In the pursuit of performance, Volkswagen has moved the Polo’s battery into the boot to even out the car’s weight distribution, but this has had an adverse effect on luggage space.

There’s 204 litres on offer, which is a disappointing figure. You do get a level load lip, while the back seats fold flat to create 882 litres of space, although that’s well behind the rival Peugeot 208 GTi’s 1,076-litre maximum. 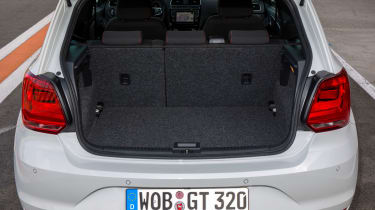 Back seat space is reasonable, and if you need to access them regularly, you can spend an extra £630 to get your hands on a five-door Polo GTI. However, compared to the three-door only Ibiza Cupra, the three-door GTI is just as easy to get in and out of. The front seats fold and slide forward far enough that you can easily thread yourself into the back row.

Storage is good, too, with deep door bins and a big glovebox, while the bin ahead of the gearlever includes a USB socket, making it easy to charge your phone on the move.

There’s a wide range of seat and wheel adjustment, but if you want the added peace of mind of parking sensors, they cost an extra £400.

GTI uses tech from other models in the VW range, so should be reliable

VW slipped two places in our Driver Power 2016 rankings, with customers voting the brand down to 24th overall when it comes to satisfaction. So, if anything goes wrong with your car, you may not be in for the best experience.

However, the Polo GTI uses plenty of tried-and-tested components, including a version of the Golf GTI’s engine and electronics that are shared with the rest of the Polo range. That means it should be reliable, although Volkswagen’s reputation for building cars that will last isn’t as strong as some Japanese rivals’.

The revised Polo wasn't crash tested by Euro NCAP, but the pre-facelift Mk6 earned a five-star rating back in 2009. There are six airbags, post-collision braking and a tyre-pressure monitor, while the GTI’s uprated brakes should boost safety. Yet curtain airbags are a hefty £655 option, and unlike cheaper Polo models you can’t add adaptive cruise control or autonomous emergency braking.