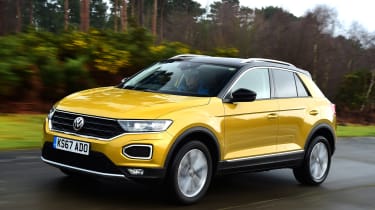 The T-Roc has now been tested under the latest WLTP test regime, and the results are interesting when comparing petrol and diesel side-by-side. At the entry point to the range, the 1.0 TSI 115PS engine manages a best combined economy figure of 48.7mpg, while the 1.5 TSI Evo with cylinder deactivation has a claimed best of 44.8mpg. Add the DSG auto and this reduces slightly to 43.5mpg, which is still better than the 2.0 TSI 4MOTION 190PS petrol, which returns a maximum of 40.9mpg. The range-topping R model manages a 34.0mpg.

Emissions range from 133g/km to 199g/km for the 296bhp R version. Fitting bigger wheels to any model has an impact on fuel economy and emissions, so it's worth checking exact emissions figures if you're looking at a T-Roc as a company car. 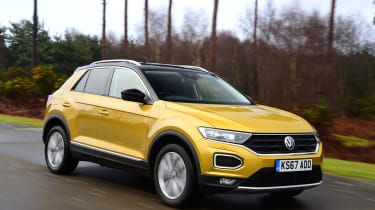 Insurance groups range from 11 for the 1.0 TSI S to 23 for the 190PS 2.0 TSI petrol, with the diesel models somewhere in between. These figures are actually on a par with the Golf, and also similar to the Audi Q2. The Cabriolet starts at group 14 for the entry-level 113bhp 1.0-litre Design version, moving to group 21 for the higher-spec 1.5-litre R-Line variant.

The combination of being a small SUV and VW means the T-Roc is a pretty good performer for depreciation. Buy one, and expect to get around 45-50% of your cash back when you sell after three years. That's very slightly ahead of the Audi Q2, but not quite as good as a MINI Countryman. The T-Roc Cabriolet also retains a good chunk of its value over the same period - around 45%.