The punchy 2.0 bi-turbo diesel is the most powerful VW Tiguan available, but is it worth the extra money? 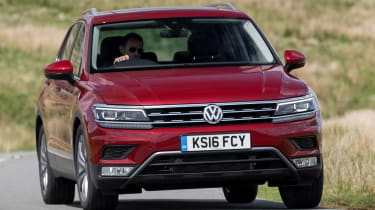 This BiTDI is the most powerful Volkswagen Tiguan on sale and packs quite a punch, marrying performance with the usual refinement and high-tech ambience we’ve come to expect from VW’s mid-size SUV. However, in £37,080 SEL trim it’s pricey when a two-wheel drive 2.0 TDI 150 DSG in the same spec costs £5,240 less, is more efficient and does pretty much everything this car can do. However, if four-wheel drive and grunt are essential, then this Tiguan ticks the box.

Volkswagen’s Tiguan SUV has been on sale for a number of months now, and as models flood our roads, bosses are looking to maintain interest by introducing an new top-of-the-range 237bhp 2.0-litre bi-turbo diesel to the range.

But to mark the motor’s exclusivity, it’s only available in two trim levels: the £37,080 SEL model we test here and an even pricier £39,270 R-Line model for those wanting something sportier. Whichever way you cut it, though, that’s quite the sum of money – but this Tiguan justifies its price tag with some impressive performance figures. 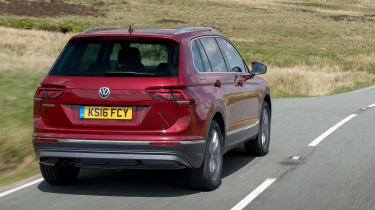 Alongside the power output, the twin-turbo motor serves up 500Nm from just 1,750rpm, so with launch control from the standard-fit seven-speed DSG auto gearbox the Tiguan sprints from 0-62mph in an impressive 6.5 seconds.

That torque output means its extra performance over the 187bhp 2.0 TDI (which boasts 400Nm of torque) is more noticeable once the car’s rolling. The gearbox swaps ratios smoothly, but with lots of mid-range punch you don’t need to stamp on the throttle, which quickly causes the gearbox to kick down.

You can make smoother progress and easy overtakes in-gear by being gentle on the accelerator, while the quick steering means the Tiguan is surprisingly agile given its high-riding crossover stance. 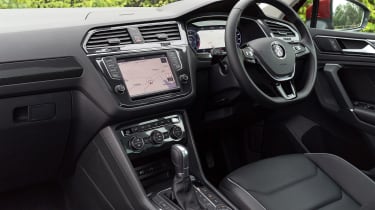 There’s lots of grip and not too much roll, although the chassis setup does feel firmer than rivals as a result. At least it gives the Tiguan a composed feel in corners, and with VW’s 4MOTION four-wheel drive system (fitted as standard here) you’ll rarely see the traction control light blinking under power.

Herein lies the BiTDI’s problem. While there’s no doubting the performance it serves up, it comes at quite a price – even on a monthly PCP deal.

Given most Tiguans won’t venture off-road, a lower-powered two-wheel drive 2.0 TDI DSG does everything the high-power car does, save for the slightly snappier performance.

With a 615-litre boot it’s just as practical, and the same high-tech options are available. Quality is still first rate and there’s no compromise when it comes to refinement. Only there’s a big saving to be had, too.