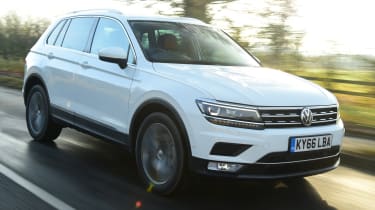 Although the VW Tiguan offers an attractive blend of practicality, sharp styling and a classy interior, this particular model doesn’t look like good value. The 188bhp diesel engine is powerful, but it’s not the best fit for the car and economy takes a hit. It’s not as good to drive nor as comfortable as the rival SEAT Ateca either, which puts the high price tag into even sharper focus.

The Volkswagen Tiguan sits in a crowded class of talented cars, with the SEAT Ateca, Peugeot 3008 and Nissan Qashqai all going up against it. Indeed, the Tiguan is such a significant a competitor that many manufacturers position it as the main benchmark in the class that their new models have to beat - be that publicly or privately.

Unfortunately for Volkswagen, the latest model hasn’t quite impressed us as much as we had expected, with rivals overtaking it in many areas. Here we’re giving the Tiguan a chance to fight back by testing this SEL model with the 188bhp 2.0-litre diesel engine to see how it stacks up against the competition.

The SEL model sits below the R-Line model in the trim range, although at £33,260 this car isn’t exactly cheap. There’s plenty of equipment, however, and although our test car was loaded up with over £6,700 of options, you do still get three-zone climate control, an 8-inch touchscreen with sat-nav, 19-inch alloys and a raft of safety kit as standard. 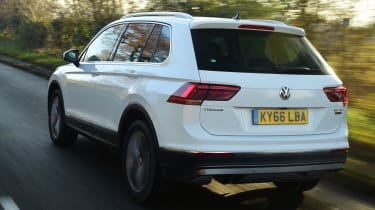 This car also gets a slick 12.3-inch Active Info Display in place of the dials behind the steering wheel. It’s able to display sat-nav maps, media info and virtually anything else you might find on an infotainment system, right in front of the driver. It’s a great system and works very well here.

The rest of the interior is suitably upmarket, with a neat dashboard layout and plenty of high quality materials around the cabin. It’s spacious inside as well, with lots of storage space and generous leg and headroom in the back. The 615-litre boot is one of the biggest in its class, and folds down to 1,655 litres. The Tiguan is bigger than many cars in its class, though, which means it feels a bit more cumbersome on some of the UK’s small roads than the SEAT Ateca or Renault Kadjar.

The 2.0-litre diesel engine in this model means the big Tiguan isn’t wanting for performance, with 0-62mph taking 7.9 seconds. Unfortunately, however, the power delivery is frustrating on the road. A huge 400Nm of torque arrives at 1,900rpm, and the 188bhp power figure comes in at 3,500rpm. This means that at a cruise and at low speed, when you need the power most, there’s a frustrating delay and then a huge rush of power as the boost arrives. 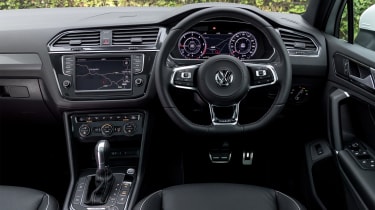 Pulling up to a junction and moving away without coming to a complete stop gets frustrating as a result - often you find yourself going too slowly, so you put your foot down instinctively and the car shoots forward. It’s just not that easy to drive smoothly. The DSG gearbox doesn’t help either. Although it shifts quickly, it sometimes drops into too low a gear, causing revs to flare unnecessarily.

We’d definitely go for the lower-powered 148bhp diesel in front-wheel drive form, which has plenty of power and feels smoother overall. The 188bhp car with 4WD can tow 500kg more with a braked capacity of 2,500kg buy you’re not likely to need four-wheel drive most of the time and the lower-powered engine works best for most people - especially with economy of 57.6mpg compared to the 188bhp car’s 49.6mpg figure. 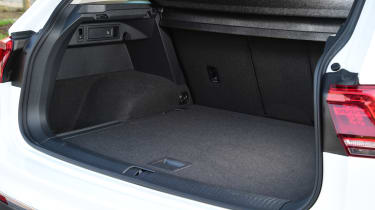 The Tiguan is pretty good to drive, with plenty of grip and composure in corners, but it does feel heavy and the steering doesn’t have enough feedback. The Ateca is more fun to drive, but the crucial thing is that the SEAT is also more comfortable. The Tiguan we tested had 19-inch alloy wheels fitted, and it crashed over lumps in the road. It’s particularly bad over speed bumps, too - while not back-breaking, it’s disappointing in an SUV from this price bracket.

And there lies this Tiguan’s biggest problem, the price tag. The SEL model costs £33,260, which is significantly more than rivals from Nissan, Renault and SEAT with similar specifications. The quality interior and decent kit list goes some way to mitigate that but we still think the price is just too high.