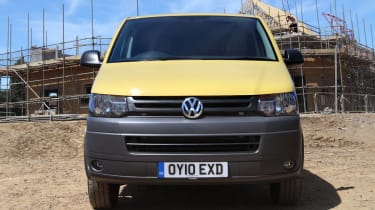 The fifth-generation Volkswagen Transporter, or T5, is an excellent midweight van with a choice of two body lengths and three roof heights. There’s only one engine to pick from – a 2.0-litre TDI common-rail diesel – but it’s offered with five power outputs. Lower-powered 83bhp, 100bhp and 112bhp versions drive the front wheels through a five-speed manual gearbox, while the 138bhp and 176bhp models get a six-speed manual box as standard and the excellent VW DSG twin-clutch automatic set-up as an option. 4MOTION all-wheel drive is also available on these higher-powered versions. Optional BlueMotion Technology delivers lower emissions and improved fuel consumption on 83bhp and 112bhp versions, while there’s also a 112bhp Transporter BlueMotion promising nearly 45mpg economy and 166g/km emissions.

The Volkswagen Transporter Kombi offers a second row of foldable seating, allowing users to carry people and materials, and the Transporter Shuttle is a nine-seater people mover. The latest version of the VW Camper, badged California, is based on the Transporter, too, although buyers who don’t have such big budgets will often carry out their own conversions on the regular van.

Every version of the Transporter is powered by a 2.0-litre diesel engine, and depending on which of the five power outputs you choose, this can be impressively efficient. A BlueMotion Technology package can be specified to reduce fuel consumption and CO2 emissions on 83bhp and 112bhp models – it does this by adding low-rolling-resistance tyres and cruise control, as well as stop-start engine technology, which stops the engine when the Volkswagen Transporter is stationary and in neutral, then restarts it once the driver depresses the clutch. The system also works the alternator harder when the van is decelerating or braking, to charge the battery with energy that’s usually wasted, and thus reduce the work that has to be done while accelerating.

For van drivers prioritising mpg above all else, there’s a Transporter BlueMotion, built around the 112bhp engine in short-wheelbase and low-roof format. This weighs less than the BlueMotion Technology model, and has improved aerodynamics, and as a result promises 44.8mpg fuel consumption. This compares to 41.5mpg for the 114bhp Transporter BlueMotion Technology and 37.7mpg for the regular 100bhp Transporter, although it can’t quite match the 46.3mpg claimed by the Ford Transit Custom ECOnetic. CO2 emissions are also impressively low: the Transporter BlueMotion claims 166g/km, although again the Ford has the edge here, emitting 162g/km. Service intervals are variable, depending on driving style, with a maximum of 18,000 miles or two years between check-ups. Fixed-price monthly service contracts are available from VW dealers.

As VW offers two body lengths and three roof heights, the Transporter overlaps with the largest Caddy and the smallest Crafter in terms of internal load volume, with capacities rising from 5.8 cubic metres to 9.3 cubic metres. Plus, in addition to the Kombi versions and dedicated minibus range, the van is available as a single or double-chassis cab, allowing customers to add a range of bodies, such as tippers and dropside pick-ups.

The regular Transporter van is compact enough to make driving easy around town, yet the boxy dimensions allow short-wheelbase models to swallow two Europallets and longer models to take three. The low 566mm floor height compares well with the Ford Transit Custom (534-583mm) and Mercedes Vito (556-562mm). Surprisingly, the floor is no higher on 4MOTION all-wheel-drive versions of the Transporter, although these do take a smaller payload. Van users choosing the 4x4 model will happily sacrifice this for the strong off-road ability – bad weather or tricky terrain needn’t stop you doing the job with a Transporter 4MOTION.

A full bulkhead is standard in Trendline and Highline models, but costs £165 extra on base and Sportline models. It's money well spent, though, protecting the driver and passenger from loads and reducing noise from the rear of the van when driving. Access to the load space is easy, thanks to twin rear doors or an optional tailgate on the Kombi, plus a sliding side door. There are six lashing rings in the floor (eight in long-wheelbase models), plus half-height hardboard lining to protect the van’s sides. A rubber load floor covering is £125 extra in short-wheelbase models and £145 in the long-wheelbase Transporter, while load lashing rails in the sides of the van are £330 and £400 respectively. The Transporter can carry 740-1,340kg in payload, although it's worth noting that T30 Kombi vans with 4MOTION all-wheel drive have a payload of less than 1,000kg, so customers won't be able to reclaim VAT on these models.

An electronic stability programme is standard on all versions of the Volkswagen Transporter. This system works through the ABS brakes and TCS traction control system to reduce the chance of slipping or skidding in the van. 4MOTION all-wheel drive is a £2,200 option for vans with the 138bhp and 176bhp engines, providing sure-footed security and off-road ability, with an increase in fuel consumption of only around 2-3mpg. All models come with daytime running lights, driver and passenger airbags and central deadlocking. Also standard is hill hold assist, which holds the service brake for a few seconds to allow the driver to get on the throttle and pull away, along with hazard warning lights that come on automatically under emergency braking. The Transporter has an enviable reliability record, with many going on to cover high mileages. Plus, they hold on to their price well, thanks to the huge demand for good used Transporters.

Even the lowly 83bhp Transporter is a pleasure to drive, and this van gets better the more power you have at your disposal. In fact, the 176bhp BiTDi twin-turbo model almost has too much grunt, and you need to be gentle with the throttle to stay within the legal limit. Manual gearboxes are fine, although lower-powered models are only available with a five-speed set-up. Higher-powered vans get a six-speed manual box, while the excellent seven-speed DSG automated manual is a joy to use. It needs to be, though, as it adds a hefty £1,400 to the price. The Transporter handles securely and is as capable on long-distance motorway journeys as it is around town. Specify 4MOTION, and you’re unlikely to notice much difference from behind the wheel in every driving, but this system comes into its own when it’s icy or snowing.

As with all VW models, the Transporter is solid and well constructed inside, with firm plastics and equally firm but comfortable seating. There's plenty of storage space, including under the double passenger seat. Mid-range Transporters have a standard full bulkhead, and this is a worthwhile optional extra on entry-level models without it, as it reduces the amount of road noise from the load area. Trendline spec brings Bluetooth, an aux-in socket, rear parking sensors, cruise control and a driver’s seat armrest, while Highline models get semi-automatic air-conditioning, plus leather on the steering wheel and gearlever. The range-topping Sportline model also has two-tone leather seats, a Kenwood multimedia system with sat-nav, floor mats, lowered suspension and a host of styling add-ons. Lower-spec models can be ordered with air-conditioning for £785 extra, while side and curtain airbags are a £250 option on these versions. Front foglamps with a cornering function are standard on the Transporter Highline and Sportline, but £270 extra on base and Trendline models.